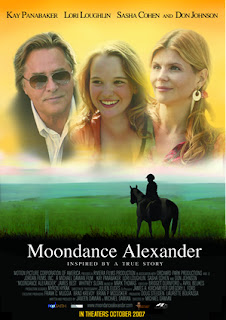 Recently, Alexandra Pauline Cohen has discussed a possible return to acting.  Based on her recent skating performances, it certainly appears that she is in need of a change.  To her credit, Sasha is a slightly more convincing actress than Tara Lipinski.  Following her sort-of success at the 2006 Olympics, many producers were eager to cast that 'gorgeous face' in cameos and to give her a shot on the big screen.  Aside from smelling a jock strap in Blades of Glory and crying unconvincingly on CSI, Sasha's most notable work was the film Moondance Alexander.

For a film debut, Sasha was tasked with mastering a difficult character...very unlike herself.  Sasha was cast as Fiona, the privileged equestrian/high school student who tormented the poor, sad daughter of Aunt Becky who dreamed of showing horses. 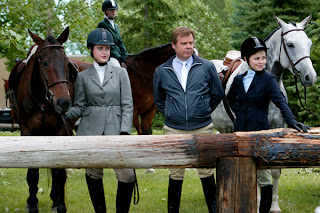 I don't know how Sasha had it in her to act spoiled, bossy and even a bit cruel.  In her few scenes in the film, Sasha always mocked the protagonist, whether it was in a short skirt with her fellow bitches in Laguna Niguel, sticking gum in her yearbook, telling the girl she'd make a good stable hand, or laughing at her for wearing rubber boots.  Wherever did she find the inspiration?

The main character had questionable fashion choices, which going by Sasha off-screen, must've been difficult for her to stomach.  Sasha's character decided to forgo looking over the course one last time before her ride.  Going by Sasha's obvious work-ethic, I don't know where she drew that aspect of her character from.

In true Sasha fashion, she didn't manage to win the title outright.  Fiona had to settle for a tie.