GPF: Only The Lonely 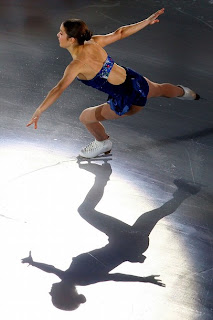 It is a rare occurrence when a ladies competition is close or even remotely watchable, yet five of the six ladies brought their A Game to the Grand Prix Final in Beijing.  For skating fans, the field was initially a letdown without Mao Asada, Yu-Na Kim or Joannie Rochette.  It was a forgone conclusion that Miki Ando would plop down five triples and take gold, but it didn't quite turn out that way.


Alissa Czisny has turned her career around.  Once a punch line in the sport, Alissa has earned the biggest title of her career to go along with gold and bronze medals at the individual Grand Prix events.  The win at Skate Canada could've been a fluke.  The fact that she didn't completely implode in Paris was step in the right direction.  Leading after the short program in Beijing, the skating world held its breath.  Czisny delivered one of the best performances of her career.  'Winter Into Spring' is becoming a signature number Czisny and it brings with it touches of Janet Lynn and Yuka Sato.  The edges are pure.  The choreography is inspired.  Yuka and Jason are doing masters with Alissa's technique and confidence.  The Alissa Czisny of the Grand Prix Final fought for every jump and presented with more soul than ever before.  Confidence is blooming.


On the other side of the American picture is Rachael Flatt.  For the past several seasons, Flatt has finished well by performing her programs without major mistakes.  There are technique problems, a lack of speed and an overall pedestrian nature to her skating, but she has been the one to stand up.  It has long been said that the measure of one's skating ability can be ascertained when they skate without jumps.  Flatt may be trying harder than ever to present, but her skating is simply misguided.  It is uncomfortable to watch Flatt try to be 'cute' in a Betty Boop way.  If one doesn't have the ideal body for skating, they need to find a way to be dynamic.  Someone like Kawahara could find a way to infuse some life into this girl.  Flatt claims her injury is no longer an issue but that she lost training time.  Even if she landed her jumps, the judges were going to place her last at the final.  Her score was lower than it would be simply for missing the number of jumps she did.  They judges have no esteem for her footwork, spins, transitions, etc.  Rachael keeps speaking about a Triple Lutz+Triple Loop combination.  The combination is rarely ratified by the callers no matter who is attempting it.  For a girl with issues rotating her jumps, the attempt appears utterly futile.  Phil Hersh encouraged Rachael to move on with her life.  While I agree that Rachael will never become a star, one would think it would be better for her to go out on a positive note.


Miki Ando landed her jumps but was unable to pull up from fifth place.  The judges ranked her first in the long by a smidgen.  We learned that Miki will be taking next season off.  I think we could all use a rest from watching her.


Akiko Suzuki provided one of the most inspired and still under-marked free skates.  There were a few mistakes, but the overall performance was imaginative and of the highest quality.  Unfortunately, Akiko is being judged as her country's third-ranked skater and not by the merits of her competition efforts.


Kanako Murakami continues to make a splash with her sensational speed and soaring jumps.  Artistically, she needs a new direction.  There won't be much more artistic growth under the direction of Yamada, but her elements continue to become stronger and stronger.  She skates with the effervescence of Lipinski and that is all that is really required under the IJS.


Carolina Kostner continues to delight judges with her tribute to the 1987 Worlds.  I miss that era as well and applaud the fact that Carolina isn't embarrassing the European judges who cheat for her.  Unfortunately, there is little justification for holding her up when she only performs four triples and none of them are very difficult.  Her Chanlike PCS scores are an obvious gift from an angel by the name of Carlo Fassi.  That level of cheating takes skill and experience.


The men's side felt like the fruition of the inevitable.  In case you've missed what is happening this season, Takahashi is coming apart at the seams after putting off his knee surgery to compete at the Tokyo Worlds.  His landings are as solid is Jill Trenary's and his quad flip is about as believable as Nikki Childs' triple full.


Nobunari Oda continues to focus on jumps at the expense of his performance.  It doesn't work unless he actually lands his planned content.  Nothing more, nothing less.


Patrick Chan's upcoming world title has been a long time coming and is simply inevitable unless he manages to fall five times.  The judges are hot for Chiddy and it may be best to just get it over with.


Florent Amodio proves that working with Morozov is a struggle when he fails to arrange for his multiple skaters to compete at the same Grand Prix events.  Chasing him around the world and being forced to work with substitute coaches doesn't work for his athletes.  Nikolai's absence was evident in Amodio's skating.  He fought through his program, but the consistency, timing and security was lost.


Tomas Verner's 'Michael Jackson' program may be lame and his glove may be mysteriously blue, but it is a pleasure not to see him embarrassing himself technically.


As always, Takahiko Kozuka's skating is appreciated but not enjoyed.  If he doesn't want to look up at the audience, why should we look at him?

The Grand Prix Final proved to be a respectable event, but it felt like skaters were missing.  Rippon, Abbott, Kim, Asada, Virtue and Moir and crazy ass Russians are needed in order to keep this sport from feeling like an engineering course at a Japanese University (at least when Ando and Oda are skating.)
Posted by OlympicEffect at 9:46 PM