Lighting The Candle: The Second Night 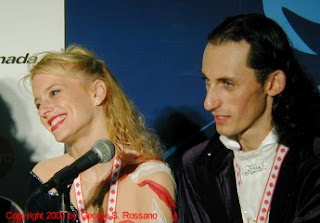 Everyone sport needs heros and villains.  Perhaps there has never been a more intriguing villain that Galit Chait.  Thus, we honor Galit for lighting up her lives by making her the second fierce Jew of Hanukkah.  Every Jewess needs a pushy parent.  While most Jewish parents tend to become doctors or lawyers, Galit Chait's eventually ascended to the throne of President of the Russian-B Team Skating Federation (AKA Israel.)

Galit was a decent skater, but she was not making an impact in American ice dance.  Thus, her father had her represent Israel at the 1994 World Championships after competing at '94 US Nationals months earlier.

It is important to remember that the US dreamt of cracking into the top 10 internationally back in '94.  This gives you a sense of her overall skating ability.

Over the next few years, Galit Chait and her token partner (he was just a pawn) passed more skilled and accomplished teams in the ranking in spite of their performance.  Rumors always circulated that Galit's father had no qualms about putting his check book where his mouth was when it came to international judges.  Galit also worked with every known Russian Ice Dance Coach (Zhulin, Tarasova, Dubova, Linichuk, Morozov and Maslenikova) in order to exploit their connections and political pull.  I mean, she wanted to improve her skating.  It was always about the skating...

The highlight of Galit Chait's career came at the 2002 World Championships in Nagano.  As if having to witness Kwan being beaten by Slutskaya wasn't bad enough, the ice dancers were so disgusted that the Drobiazko and Vanagas were placed behind Galit Chait and Sergei Sakhnovski that the majority of the teams in the competition risked their own future success and signed a formal protest to the ISU.  Ice Dance may have had blatant block judging, toe tapping and batshit crazy themes, but this was something too brutal to stomach.


To her credit, Galit accepted her medal and shamelessly denied all accusations in spite of mounting evidence.  The next season, Galit and Sergei inexplicably dropped three spots in the world rankings.


After Galit retired from competition, some of us feared that her overly-ambitious zest for success would leave a vacuum of drama in the storied discipline.  This was not the case, as Galit Chait took up coaching Roman and Alexandra Zaretsky, Israel's top dance team.  Anyone who has ever skated in North Jersey will give you a knowing look about all of the transient Russians who have come our way, but no one has stuck out quite like Galit.

In the fall of 2008, Galit, not wanting to be outdone by Pasha GHBing herself, filed a lawsuit against the Ice House for discriminating against her on the basis of her Israeli nationality.  For those who are not familiar with the area, it would be akin to claiming Beverly Hills was anti-botox.  Love her drama or hate her skating, but there is one thing you can't deny about Galit Chait---she keeps it interesting.  Unlike those snores in Michigan, you'll never have to worry about any of her rivals claiming to be BFF.
Posted by OlympicEffect at 8:43 PM