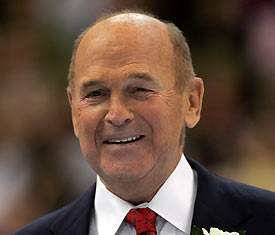 It has taken four weeks, but Dick Button has emerged as the standout judge on Skating With The Stars.  Previously, Dick appeared slightly scripted and senile.  Nothing is farther from the truth.  Uncle Dick was in his element, rusty hooting and living for a theatricality of the drama.  He proved that he is the judge who belongs in the center chair.  Johnny Weir was always great for a sound byte as a competitor, but he just hasn't hit his stride as a judge or commentator.  Uncle Dick has had years of experience.  Johnny was cast as a combination of Simon Cowell and Bruno Tonioli, but he hasn't delivered anything memorable aside from his uncomfortable cat fights with Bethenny Frankel.  Laurie Ann Gibson remains utterly irrelevant.

Tanith Belbin was an absolute vision yet again.  Her one shoulder sparkly blue dress provided utter thinspiration for these frigid temperatures.  I wasn't living for the pony tail, but the rest was flawless.  Johnny had this Olivia Newton John vibe that was working for him, but his hair was yet another disaster.  He needs to get away from anyone involved with Danielle Staub.  A coworker of mine goes to his "beauty bear" and I openly judge her for it and send her examples why.

This week, Parkettes On Ice required the contestants to master 'thrills.'  They had their choice of death spirals, throws and overhead lifts.  I was already smiling and thinking about the fights Brooke Castile must've been having with Jonny Moseley.  Oh the sexual tension!


Keauna McLaughlin skated out by her lonesome during the introductions.  Perhaps the producers were trying to create some drama?  It became very clear that Brandon would not be performing when they kept showing him M.I.A. over a stomach flu.  Clearly this mysterious ailment is something that TMZ or the E! True Hollywood Stories or yore should investigate (before they became PR puff pieces.)  Keauna didn't cry this week, but it became clear why: she got to work with John Zimmerman.  I'd be smiling too if he came dressed in that tight shirt to join me on the ice.  While Keauna likely knew Brandon wasn't coming, the producers had her come to the rink and skate around looking like a lost puppy for the cameras.

Later, we got to see Keauna skate her program with Denis Pethukov.  I will miss seeing Cheryl Burke's doppelganger.  Maybe the DWTS producers can use Keauna for some spoofy segment during a results show next season?  Black Swan anyone?  Keauna is one of the few entertaining pros on this show and will be missed.

The producers decided to show us a highlights reel of Brandon's storied two-week ice career.  It was all very touching and saccharine.  (Eyeroll)

The idiot of a host then spoiled the drama of the show by announcing that no one would be voted off this week.  Sorry Bethenny and sorry viewers who have to endure the rest of the show.  The SWTS don't even try to keep us in suspense like the American Idol and DWTS producers.  Ryan Seacrest lives for creating false suspense.  It became just a bit tougher to see if the Bethenny-Johnny cat fight would come to an end.


Bethenny appeared to take a cue from Jody from Center Stage and skate for fun.  She wound up looking like she was enjoying herself and her costume didn't make her look like a complete fool this week.  We didn't have to listen to her use the baby voice and she even made a pleasant wisecrack about being placed behind someone who didn't even skate last week.  Her knees were still stiff as hell.  She clearly was busy this week, but it was oddly her best week yet.

Things got good when Dick Button declared himself "the Betty White of figure skating.  We've been around so long, we don't give a rusty hoot what anyone thinks."  Rusty hoot.  Oh Dick, how I've missed you!  Bethenny openly declared herself the Bristol Palin of Skating With The Stars.   Laurie Ann kissed some ass and then it was time for some hair pulling: fame whore #1 vs. fame whore #2.  It was delicious.  Bethenny was on her best behavior, but Johnny decided to let her have it.  "It is clear that you don't care what we have to say, so I had no interest in your performance."  It was something along those lines.  Not particularly clever, but it was like watching two caged beauty queens fight over the same tiara.  Bethenny utterly ignored the comment when interviewed and declared that she was having an amazing time.  Oh how we can't wait for her first Post Show Interview.  The Johnnybots of Misfit Mimes will be declaring it a complete victory until someone informs them the Bethenny is the NY Times Best Selling author and the much bigger star.  They will then all pretend to never have heard of her.


Brooke Castile was next and told Jonny to go marry John Zimmerman if he loves him so much.  Oh, wouldn't we all just LOVE to?!  Brooke was rather fierce about schooling her partner about their lifts.

Laurie Ann was so inspired by the performance that she told Mr. Moguls to 'Mount Her.'  It was a total Wendy Williams moment.


Things came to a pleasant snooze with the final performance by Rebecca and Fred.  Both are so pretty and yet so dull.  Johnny Weir claims that she relies too much on Fred (though she is the strongest skater of the bunch.)  Dick busted out a classic catchphrase by labeling her lifts as being 'Spiffy!'  Most importantly, he informed the soap opera actress that she has the 'nicest bottom in this whole competition!"

Of course, I nearly DIED when Dick name dropped the life spiral and the Protopopovs.  Rebecca gave him the same confused stare that Peggy did for 30 years.

Next week will be the two-part finale.  Are you on the edge of your seat, or should we just arm Bethenny and Johnny with pepper spray?
Posted by OlympicEffect at 8:42 PM