Oh hells yes!  I haven't loved a batch of routines this much since Anna Li arrived and Miss Val told Tasha that she would NOT be having her doing a floor routine to Justin Timberlake: You will be my African Queen!

After watching UCLA for almost two decades, one begins to have some expectations about their routines.  Some will be wildly different.  There will usually be a lot of laying on the floor and STTTREEEETTTTTCCCHHHHING before the third pass and someone will always bend over at the waist and RIIIIIISE.  The past few years, Miss Val had a signature move where the girls would put their hands together behind their backs and walk in an 'S' pattern.

This season. Valorie was clearly feeling a bit inspired.  She just won NCAAs.  There is a new Olympian on the team.  Her upperclassmen have grown as performers.  It looks like she was really able to have fun and experiment in a number of the routines.  Overall, it is quite evident that Val had a bicurious affair with Twyla Tharp during college.  It was probably brief, but it is not unlike a fling you may have had where you smoked a little reefer, drank some red wine and watched the object of your affection play Tori Amos songs with two keyboards. 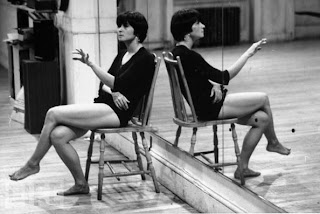 Val first flirted with Twyla during her 'ode' to her in 2005 via Kate Richardson's floor routine.  There was a false ending and a signature diva pose with ones feet pointed and the head is brought into the chest looking down at the floor.  There is often an arm extended.

Talia's routine is pure bliss.  The girl clearly works her ass off to get where she is.  Hopefully we'll see a few outings and exhibitions for her during 'B' meets and senior night.  They may like to say that every meet is a big meet, but don't be shocked if you see Talia compete against Cal State Fullerton.  The pirouettes after Talia's second pass excite me as though I've just seen Patti Lupone for the first time.

Aisha Gerber is a mystical creature from the Lord of the Rings/Harry Potter universe.  I imagine her trotting along green meadows and dipping her toes in water.  This routine is the most creative of the bunch.  The entire section before the third pass is pure bliss.  While the routine has moments of being introspective and almost private, there is a healthy level of drama throughout.

Out of all of the Asians on campus at UCLA, Sydney Sawa and Niki Tom are not my favorite.  That said, both look to be solid contributors.  Neither stands out much, but they don't disappoint either.

Olivia Courtney is a young girl who needs to spend every waking moment with Val in order to become a diva on the level of Brittani McCullough.  Hopefully they'll spend Greek Orthodox holidays together.  Her floor music is the wonderful 'Strobe's Nanafushi.'  It was the song used for the opening number of the 1999-2000 Stars On Ice tour and it will bring back wonderful Sandra Bezic memories when Olivia performs this each week.  It is evident that she is really trying and is becoming more outgoing while working on this routine.  Given that she trained at Orlando Metro, there is a good shot that Olivia will red-shirt at least one season.  She should have the performance thing down by her fifth year.

Tauny is Twyla-tastic and a sassy little thing!  I found her old routine to be a bit of a collection of Val's recycled moves, but this one looks like it will help her grow into her own unique Bruin mark.  Tauny will certainly see more action this year.  If she can get her tumbling situated, this routine will have serious growth potential.

Lichelle Wong brings me back to Antolin and Dantzscher levels of diva.  It appears that she is unleashing her inner bad girl and it makes me like her that much more.  And I absolutely live for the Twyla-type ending that was previously discussed.

MDLT is aggressive as sin.  Her extended sequence laying on the floor is a bit curious, as she is often chided about her fitness level.  There is something about Monique that stands out.  She goes against my typing Ekaterina Gordeeva tastes, but I like her.  There is a competitor inside her.

EHH- This new routine looks like Val really got to play.  I can tell that it is one of those that will sneak up and grow on me.  I really dig it whenever Elyse pushes down on the floor and rolls her head and shoulders from side to side.  It is what indicates that this nice sweet Canadian is a closet bad ass bitch.  The way that Elyse does her second pass indicates that she is one who enjoys the spotlight.  I question whether a double layout is the right pass for her.  Given how much they are going to depend on big scores from her, opening with a reliable double arabian could be the smart decision.  Then again, I suspect they want her to really take ownership of flipping twice in the straight position, as the girl has been known to have bar dismount issues.

McCullough- As a repressed Catholic, it will always amuse me that Brittani learned to dance like this in church.  She certainly wasn't wasting any time memorizing the Nicene Creed.  Her piked full in is out of this world and earns the right for this routine to be clapped along to.  There is enough of the old, new, borrowed and blue to keep us interested, while not making us miss the previous routine.

This will be a good year.
Posted by OlympicEffect at 2:33 PM