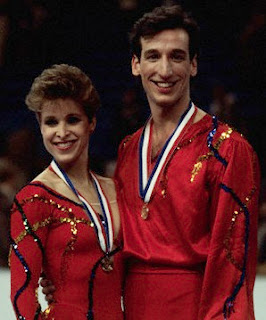 Though many youngsters think that American ice dancing was invented by Belgosto or Marlie, any real fan of American ice dancing will tell you that the great Jewess, Judy Blumberg, and her partner Michael Seibert were the original dancing queens.  Even during the height of Belgosto's success, Terry Gannon's bushy eyebrows and soothing voice couldn't get Susie Wynne to agree with him that Belgosto were the greatest American ice dancers ever.  Ms. Wynne was smart enough not to forget the prodigal daughter, Judy Blumberg.

Judy (and Michael) had the great misfortune of skating during the era of Torvill and Dean.  While everyone was singing the praises of Bolero, Judy and Michael were breaking ground with their sophisticated and modern take on a classical piece: Scheherazade.  Long before Michelle or Yuna (or even Midori) got ahold of this gorgeous piece of music, Judy and Michael killed it with perfect footwork and innovative lifts that some might argue would hold up in the world of IJS.  Though everyone raves about the final move of T/D's Bolero, who could forget the final move that Judy and Michael brought to the ice in Scheherazade?  It served as the inspiration for many a dance lift in the years to come.  See, e.g., Lobacheva and Averbukh (the fourth candle)'s ending in A Time for Peace.

They garnered two perfect 6.0s at Nationals and were headed for an Olympic medal.  Though AuntJoyce knows how strongly I avoid pointing fingers at corrupt judging, the judging of Judy and Michael at Sarajevo was disappointing.  The Italian judge saddled them with a 5.5 for artistic impression and cost them the bronze.

To further add to the drama, when they got to 1984 Worlds, Judy and Michael actually skated a subpar performance of the number.  And yet, a different Italian judge awarded them their sole 5.9 for technical merit, put them in second in the free dance portion, and they won the bronze for the third straight year.

Judy went on to become a fabulously critical commentator.  While the rest of the North American media sang Bourne/Kraatz's praises in the 1998 Olympic season, Judy called it like she saw it.  Though she easily could have fallen into the easy position of likening the Canadians' bitter disappointment in Nagano to her eerily similar experience in Sarajevo, Judy reminded us all that Riverdance was no Scheherazade.
Posted by OlympicEffect at 12:09 AM