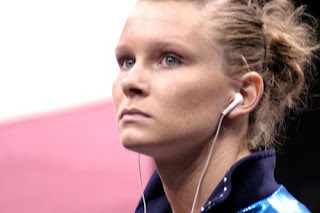 Bridget Sloan verbally agreed to the University of Florida.  Bridget recently had shoulder surgery and knows her elite days may well be behind her.  She may join the team for next season, as they do have an open scholarship and she graduates from high school in a few months.  This is certainly an upset in the recruiting world, as Jay Clark has been gunning for Sloan for some time.  He connected with her and his gymnasts certainly wanted her on the team as well.  This definitely keeps the talent pouring into Gainesville and continues the power shift in the SEC.

It has also been reported that Ivana Hong has verbally agreed to go to Stanford.  Ivana had been between UCLA and Stanford for several years, but Mama Hong is a Stanford alum who wanted the same for her daughter.  Ivana may also attend next year, as she too knows that her Olympic dreams may be a stretch at best.  Ivana was accepted into Stanford academically.


Alexe Gilles switched coaches to Yuka Sato and Jason Dungjen.  This is their third high-profile student.  Unfortunately, the move may have come about two years too late.  Alexe was a talented skater in 08/09, but has racked up two years full of bad performances that have likely eroded her confidence.  She was overshadowed in Tom Z's house of negativity.  Yuka will likely force her to become even more independent.  There are those who have thought Alexe's skating suffered in part due to her twin sisters absence.

Florida practice update.  Macko will be back on beam at Regionals.  Marissa King continues to sound far more intelligent than the rest of the gymnasts in the NCAA.

Suzanne Yoculan and Kevin Copp preview this weekend's upcoming regional showdown between UGA and UCLA.  Suzanne lets it be known that she thinks UCLA should emerge victorious.  Both teams have struggled with momentum, which will make it interesting.  UCLA has to end on beam, which (as always), is an extremely inconsistent event for them.  Part 1   Part 2

Catalina Ponor was given four months to get back into physical shape.  She officially rejoins the National Team Training Squad on Friday.

Posted by OlympicEffect at 4:57 PM