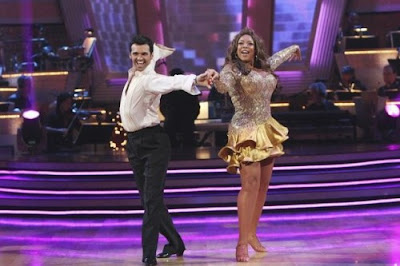 It was nice of President Obama to realize that his approval rating would plummet even lower if he dared to pre-empt Dancing With The Stars.  The music is blaring, Brooke Burke is looking like a pleather whore and the spray tans are out in force!

Sugar Ray and Anna aim not to look like Ninja Turtles in this week's Jive.  The producers are being beastly to the contestants by forcing them to perform the Jive/Quickstep in Week 2.  It is far too early for most of the dancers to survive these dancers, but doing them this week and bombing will help for the perception of their 'transformation' throughout the series.

Sugar Ray and Anna have more charm than many of the couples.  His kicks and flicks could be freer, but he really makes an effort to connect with the audience and perform even when he appears to know he is far from a technician.  He suffers from flat feet, but he is not as bad as Lance Bass or Donny Osmond.

Len thinks Sugar Ray in is jeopardy.  'Talk to the hand.'

Len: Do you think I want to say negative things about you?
Anna: Yes.

Len: It lacked refinement and any dance quality.

Bruno is not having his kicks/flicks.

Carrie Ann points out his facial expressions and notes how spastic it was.  It was not sharp or crisp like his boxing.  I would also like to pretend as though I regularly watch him box so that I can comparisons for him.

Brooke Burke says she he is famous for his footwork.  She seems like the type who would date boxers or basketball players.


Kendra and Louis- She is not a lady.  Well, grandma did warn me about 'those girls.'  She is putting a 'dark cloud over this.'  Kendra is into some flaky shit.  She doesn't feel confident or sexy...she just disrobes for millions.  Why?  Because she feels fat and ugly...naturally.

Her posture and hold is still, but has a level of promise.  There are aspects of this that are better than her cha cha, but she certainly needs more finesse and less rigidity.  There is no grace going on when he dips her back.  Even her facial expression is still and forced.  The kicks are a bit 'meh' and they get a tad thug at the end.  Overall, it was better than Sugar Ray by a point or so by each judge.

Bruno: It is tough being a lady, isn't it.  You tried your best, but you were very tight.

Carrie Ann: I saw you take a step forward.  Elegance is a state of mind.

Len: Your posture was hit or miss.  Sometimes, it was excellent.  I saw improvement.

Chris Brown is performing tomorrow.  Note that ABC canceled Adam Lambert's appearance on GMA for being a sexualized homo, yet Chris can be a girlfriend abuser, vandalize their morning show and still perform on their top rated program.


Chelsea and Mark work the Jive.  He is pushing her and pretending like she is at risk for going home this week.  If he kicks her in the face, he'll get her an ice pack.  Mark is crushing on her brain.

Chelsea definitely has the potential to make the finals.  The girl has charm.

Of the performances thus far, Chelsea is the most committed to the concept, performance and choreography.  Her confidence appears to be growing.  Chelsea has the best footwork that we've been this far, but I'm sure this is not as good of a Jive as she'd be able to do mid season when her stamina is increased.  Loving her hair and that is what is really important.  I didn't see many flicks or kicks.

Carrie Ann: I love choreography like that.  There is a time and a place for that, but this wasn't it.  It was hard for me to see your Jive.

Len: Mark, once I see doors and things, you're on a sticky wicky.  Too much messing about.  Not enough Jive.  This girl has fantastic potential.

Bruno: I actually liked the weird and wonderful side of it.  It was like Marcell Marceau desperately seeking Lolita in A Clockwork Orange.  Then there was the Jive part.  It could've been sharper.  I really enjoyed it.

(I tend to agree with all of the judges.  There needed to be more Jive, but it is early for that dance.  Period.)


Chris Jericho and Cheryl Burke-  Chris is terrified of Cheryl.  She knows that she has her work cut out in order to make it through this season.  Cheryl has the posture bar out and is opening up a can of whoop ass.  She isn't bantering with him as much as usual, but they didn't give her someone to flirt with this season.  The Quickstep is difficult for week two, but Chris actually is showing better technique and foot placement than Kendra.  His posture is acceptable but not fabulous.  Their chemistry as a couple could be better.

Len: My expectation was a lumbering lump.  It was bright, breezy, light foot, good frame.

Carrie Ann:  I like the bum just where it was.

Cheryl gave an awkward 'perfect.'  There doesn't seem to be much love lost between Cheryl and Carrie Ann (ever.)


Petra and Dmitry- Working the Jive.  They worked on the trampoline for their package.  Their costumes are marvelous, but it is a mildly stiff Jive.  It is not as bad as one might have feared.  Overall, the performance is much more of a rehearsal dance.

Bruno: Work on your core strength.

Cheryl: Your kicks and flicks were tight and sharp.  I was really impressed that I agree with Bruno: you need to work on your core because your shapes get funky.

Dmitry really didn't need to keep his shirt on for this performance.

Petra wants to stay on the show in order to learn the English.

Kirstie is literally working her ass off trying to catch the train in the Quickstep.  "Your quicks need to be quicker."  She says every week with the dancing is about five pounds, so she needs to make the final to make her goal.  The quickstep is 20 lbs according to Maks.  WINNING!

Maks and Kirstie are really going after it with gusto.  Her frame is magnificent.  It is amazing that she claims not to have dance training.  These two are very musical and the chemistry is uncanny.  And she grabs him for a kiss at the end.  Kirstie really kept up and displayed good technique throughout.  She did lose her posture for a moment near the end of the dance.

Carrie Ann: You are so in your element.  I love watching you dance!  There was a little trip up at the very end, but the rest of it was fabulous.

Bruno: You started beautifully, but started to wilt and foot faulted.


Mike and Lacey...the trashy mess and her unknown partner.  It is okay to bounce.

Mike is having a guitar hero moment.  Unfortunately, he has to actually dance.  It is definitely an improvement over last week, but that isn't saying much.  There is a very rigid quality about Mike, but his pigeon toes went after it.  He did kneel for quite a while to kill time. Lacey would definitely get kicked out of BYU for dancing like such a slut.  Whoredom is a state of mind.

Len:  Good news, it is better than last week.

Bruno: I have to say, some moments your kicks were very very good.  You look like a fly stuck on fly paper.

I wonder if Romeo has seen Grease...

He is NOT the one that I want in the finals.  His dancing is middle of the pack at best, but he is certainly better than his dad. His technique is not suited for the quickstep, as this dance requires one being clean and actually having some...

Carrie Ann: You definitely have a certain style.  (Mentioned posture and style as areas to work on.)

Len: No wonder we have global warming with the hot air coming out of you two.  That was the best dance of the night.


Wendy and Tony... hold on for a hot mess.  Wendy says she will do more of what the judges said.  She is worried about doing the quickstep and jumping with her boobs.  "They're good and I want to keep them that way."  Wendy is certainly looking more relaxed in this practice package.

More personality from the very start.  She has really upped her performance level.  Wendy's heels look lower than others so she won't tower over her partner.  They definitely slowed down 1/3 of the way through the dance.  Len won't like the shenanigans at the end (to kill time.)  It was definitely better than her cha cha, but anything is.

Carrie Ann: Thank you.  That's what we wanted to see: Wendy Williams on the dance floor.  You lost a little steam in the middle and kind of got it back in the end.

Len: It was a little economical with the movement, but an improvement.

Bruno: Yes you sassy mama, you can handle my laundry anytime.

Tony was hoping for more from the judges.


Ralph and Karina...Real or not real...that IS the question about Ralph's hair.  His kids came to critique.  They look mighty Italian.

Last week wasn't a fluke.  He is attacking this Jive.  This might be the best choreography Karina has ever done on this show.  This is certainly the best Jive of the night.  Len can't complain about content with this dance.  He has great natural rhythm and musicality.  His kicks and flicks were awkward in parts, but the dance was strong overall.

Len: I think you attacked it a bit too much and it was a bit frenzied.  (Boos)  I liked it!

Bruno: You have a huge, huge likability factor.  You inhabit the character.  Sometimes your kicks were not as sharp as they could be.  WATCH THOSE HANDS!

Carrie Ann: You have to be sharper!  You're working at the level of 8 as opposed to 10 with every move.

Hines and Kym- Hines is the first one to cry injuries.  They are working on slang and quick stepping.  Kym is one of the best pros by far.  Hines is fun to watch.  Lots of charm (mostly from Kym.)

Florence Henderson is mugging for the cameras yet again!  She won't leave the ballroom!

Ralph/Karina lead with 45.  Mike and Lacey are at the bottom with 30.
Posted by OlympicEffect at 5:22 PM