in the water they can't see you cry: A Book Review 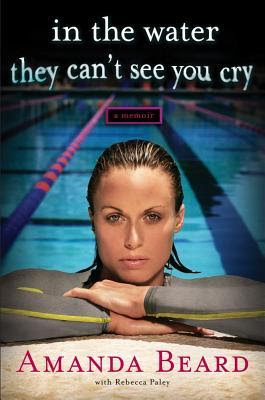 With such a great title and intriguing character (sweetheart turned Playboy model turned mother), I am left feeling somewhat disappointed after reading Amanda Beard's memoir.  I've read fantastic memoirs such as Agassi's, Maureen McCormick's, slightly average/below average like Johnny Weir's and countless ones not worth the paper they are printed on.  Amanda Beard's memoir hovers in the Johnny Weir category of a 'beach read.'

I vividly remember Amanda Beard as a fourteen-year-old affable charismatic sweetheart at the 1996 Olympics.  Given that her races and engaging fluff piece were sandwiched in between rotations of the Magnificent Seven's gymnastics meet, it is hard to forget that Amanda Beard made her father stop the car because a rolley-poley bug crossed the street or that she had four parakeets and two cats.  With a winning personality, smile and incredible talent, the sky was the limit for this starlet.  Yet, I also remember checking the newspaper for years for her name when reading results in the newspaper and wondering what happened for her for the years after Atlanta.  Like Moceanu, there was a growth spurt and personal turmoil.  Her father didn't attempt to murder her coach, but she did have real struggles of her own.

Amanda Beard makes it clear that her family doesn't discuss things.  Her mother left home one day and never gave a real explanation about divorcing her father.  We never learn why and that is just par for the course in Beard's life. (She keeps in touch with her mother, who attends all of her meets.)  One would never accuse Beard of being a scholar and neither would she herself.  A sufferer of dyslexia, Beard is far from an academic achiever, but she isn't a 'dumb jock.'  Beard has definitely done things her own way and learned from the school of hard knocks, yet it is difficult to ascertain whether she isn't very reflective or deep, or just a typical member of her family being reluctant to discuss anything private or touchy-feely.  Beard is typical of many seemingly happy successful people whether there is quite a bit of pain beneath the sunny disposition.

I'd never fault Beard for her bulimia, her issues with cutting or her struggles at giving over her self worth to men.  I believe she is courageous for being so revealing, yet I do wonder if she has ever gotten to the root of her problems or just lucked out at finding a wonderful man to help her become whole.  Reading the book, it is far from shocking that is took until 2008 for her to seek therapy (and only at the insistence of her future husband.)

Throughout the book, Beard is engaging, likable and at times unintentionally revealing.  One of the most curious aspects of the book is that she subtly outs Ian Thorpe, who is constantly rumored to be gay.  Amanda has a boyfriend, yet she loves cuddling with gorgeous Ian, shopping with him, watching movies, laughing, getting dressed up and going to dinner, yet she thinks it is interesting that they've never kissed.  I get that Amanda was busy working her ass off in the pool while we were watching reruns of Will & Grace, yet the sections about Thorpe beg the fun debate: is Amanda protecting a friend or is she just too naive and lacking the introspection to grasp the obvious?

While reading about Amanda's struggles with self worth, body image, anger and men are interesting, there lacks a fulfilling resolution.  As one of my friends put it, "she pretty much says that getting married and having a kid solved all of her problems."  It is true that Amanda's husband helped her heal herself in many ways and she does seem like someone who has struggled and become the better person for it, yet the swimmer doesn't seem to have come out of the darkness with any profundity.  There is not much of an explanation given to why she left the sport at the top of her gave after Athens or how she dealt with the pressures of being a favorite for gold.

Fact: there is far more written in the book about her Playboy shoot than there is about any of her gold medal races.  We know that Beard is competitive, but she doesn't help us capture the feeling of a race the way Agassi describes the battle of a tennis match.  There is almost nothing written about Beard's transformation to a lucky bronze medalist in the Sydney to the world's best breast stroker and what triggered her success.  We do learn all about her turning professional (not shocking with her academic struggles), but not about what led to the decision to turn to modeling after years of feeling fat and ugly.  There are times when it feels the book can be broken down to a short narrative:

I was successful without thinking about it, I went through puberty and sucked in the pool, I worked hard and made it back, I hated my body and purged, I modeled and then I showed my breasts because it wasn't a big deal, but I hate my body and am not pretty, but I posed nude for PETA, and I got into a relationship with a great guy and now love motherhood.  Isn't motherhood the best?


Yes, the book does end with the 'Isn't motherhood the best?' cliche, yet it doesn't come across planned, trite or wrapped in cynicism like a Beyonce interview.  There is something likable about Beard, but she leaves you wanting more.  We know all about her drug use and almost nothing about her career in the pool.  The reader is life dissatisfied the same way swimming enthusiasts are left with her inconsistent commitment to the sport and tendency to only return for the Olympics.  Given that she has the same agent as Liukin, one can wonder Evan also distracted her and made coming back to the sport more difficulty by chasing the money while it was hot and pressuring her to do the same.  Through it all, one is left rooting for Beard, even though the book doesn't leave you 'knowing' her.  For someone branded as an animal lover, we only learn in passing that the neat freak had four German Shepherds in a 1,000-square-foot bungalow.  She prefers training distance to swimming and casually mentions that she is known for being a strong finisher in the pool.  Yet, I find myself rooting for her and wanting to go to one of her holiday parties.  The sunny California girl is frustrating, but wins me over.  She is definitely her own breed and sometimes, it winds up working for her.  There is a certainly a degree of self-absorption that is par for the course in the case of any celebrity writing a memoir, but far more apparent is a girl who is still figuring out just who she is.

Posted by OlympicEffect at 7:46 PM