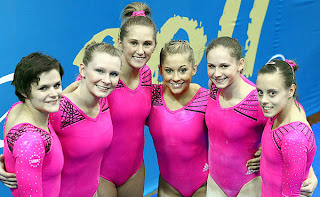 The Pan Am Games will be broadcast live at 5 PM tonight.  Check USAG's website for details.  Bridget Sloan was supposed to compete all four events, but it relegated to bars and floor due to a foot injury sustained in training.  Sloan is one of the few people who does floor on a foot injury.  Then again, when your feeling for beam is shaky to begin with, a foot injury is deadly.  Baby Girl needs to have a good meet, get her butt into training and hope she is in the best shape of her life for next year.  She cannot take time off after a long season where she only competed at Pan Ams.  Martha is choosing to watch this meet on video, which shows just how much she believes in some of these girls.  Shawn Johnson tweeted a photo of an 'upgrade,' which appears to be the back full she performed at camp but has yet to show in a televised meet.

Jonathan Horton didn't get enough face time at Worlds and is letting us known he'll be back ASAP from his foot surgery.

Mother Russia has raised eyebrows in the boring world of gymnastics for questioning the judging system at Worlds while subtly implying that they deserved higher scores.  I applaud all Russians for their candid nature, even when they look ridiculous.  Many annoying Americans accused Komova of poor sportsmanship for crying on a medal ceremony and looking upset over not winning a title she clearly wanted.  In the world of Mother Russia, that is about a 1.5 on the sportsmanship meter.  I'm used to Slutskaya, Butryskaya and Plushenko storming out of Kiss and Cry areas and Khorkina ripping off medals.  It is refreshing and thoroughly entertaining in a world where Michelle Kwan taught us all to bullshit brilliantly at press conferences.  Let's practice our favorite sayings, such as "It's not the color of the medal, it's the process, "(I'll just stay around for a decade and wear gold dresses at every available moment) and "the ice is my canvas."  To her credit, Komova merely says they have a lot of work to do between now and London.  Our girl Aliya Mustafina would've thrown a few bitches under the bus.

Speaking of Mustafina, Alexandrov says she may be back in competition as early as December.  There are indications she may compete in Acapulco, December 9-10.


For those who can't get enough of awarding the Russian juniors gold medals before they ever set foot at senior ISU events (thinking of a few specific posters), I've added a few videos from a recent domestic event after the jump.  This should take care of your glove fix for the week.


Posted by OlympicEffect at 5:45 AM