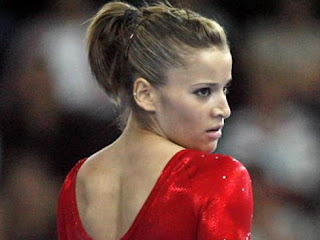 Like many people, I am thoroughly entertained watching the effusive Alicia Sacramone.  While I never expect her to upgrade her passes, I find her a breath of fresh air compared to the current generation of American robots.  I love that Alicia stuck it out and became a better competitor over many years.

I do take issue with Alicia being considered the most decorated American gymnast in terms of World Championship medals.  The term 'most decorated' is iffy because one really has to consider World and Olympic medals.  The European gymnasts include European and World Cup medals in their overall haul.  One could also consider medals at US Nationals.  Things get a bit murky when some successful gymnasts competed during a time when Worlds were held every other year, while some got to attend a split Worlds in 1994 and can claim being the member of two distinct World Teams.  Some gymnasts have medals from World Champions and Olympic Games in the same year. 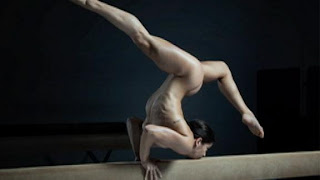 Gymnastics is so inconsistent that I don't take much stock in decoration tallies anymore.  It is a useful tagline for agents, but it doesn't mean much.  As an athlete, you never want to win a title with an asterisk.  The title is forever tainted and ultimately becomes a source of embarrassment.  Courtney Kupets earned a gold medal at the 2003 World Championships because she competed in prelims.  It is not the way to win a medal and even that has a feeling of a half medal to many.  I don't doubt that every bench warmer has their role on the team, but there become gray areas. Like many people, I do not consider Alicia Sacramone to be worthy of a medal at Worlds.  Alicia is a wonderful gymnast and personality, but she did not earn a single score at these championships.  She was not even in the country when the team was competing.  I feel the same way awarding Alicia this medal as I do when Courtney McCool mentions her Olympic Silver.  It just feels tainted.

It is not necessarily Alicia's fault for holding onto her position on the World Team.  While Martha does like Alicia, Kathy Kelly has long been her biggest supporter.  Martha was 'thru wit her' for a while before she earned her way back into her good graces.

While many people get annoyed over Nastia Liukin and skaters like Johnny Weir, Michelle Kwan and Sasha Cohen being deliberately coy about their comebacks, I have the same reaction whenever we hear Alicia discuss upgrades.  Even worse, I feel an eye roll at the revisionist history that Alicia Sacramone is the Lavinia Milosovici of Team USA.

Milo was a great team leader and captain.  True Fact: Alicia anointed herself the Team Captain in 2008 and no one disputed her because they didn't want to wind up at the receiving end of anyone's wrath.  Alicia did give a rallying speech in 2007; she also acted like a complete drama queen at the 2008 Olympic Games and got herself so worked up that she could not focus on the task at hand minutes later.  Her behavior during event finals at the 2007 Worlds proved that the success of the team doesn't 'come first.'  I love her candor, but I do think the media has taken the speech at the 2007 Worlds and run with it far beyond its merits.

Many expert journalists were present on the media call for Team USA.  Unfortunately, these journalists do not spend a great deal of time covering gymnastics.  They are not invested in the sport the way journalists cover football or the way Phil Hersh and Christine Brennan covered figure skater for a decade.  The members of the media are so eager to form their own engaging narrative to get their stories in print that they overlooked the fact that when asked about how she could help the younger members of Team USA, Alicia was flat out stumped.  Let's be real: when you're on Martha Karolyi's team, Martha is the Team Captain in every situation.  Everything else is pretty much a crock.

Alicia will likely come up just shy of a return trip to the Olympic Games.  This medal and distinction may ease the twinge of pain she feels as she recovers from her surgery, but we are not done seeing Alicia.  Even if she doesn't compete, Alicia will be all over TV during the Olympic Games.  We're in it with her for the long haul.  We may all smirk at the (seemingly) born-again virgin tweeting bible verses, but we need to remember that we supported her and have responsibility in creating this fall sense of self.  The girl is a phenomenal vaulter, but she is also the third-best vaulter on Team USA in a time when she won medals without having to stick her vaults.  It may be harsh to point out that Alicia earns most of her medals from a final where most gymnasts choose not to go for due to praying to remain in tact, but you know that Shannon Miller is likely thinking the same thing.

Alicia is an effervescent girl who is fun to watch and sets the iPod playlist for Team USA, but let's keep things in perspective.  Aly Raisman was shown taking the initiative to give her fellow floor workers a speech during team finals.  It appeared genuine and not for the cameras.  We're unlikely to ever hear anything about it.  Anna Li handled herself with so much class on the floor at Worlds in a leotard and stood on the rostrum, yet the history books will say nothing of it.
Posted by OlympicEffect at 9:59 AM