2011 Worlds: The Direction of the Sport 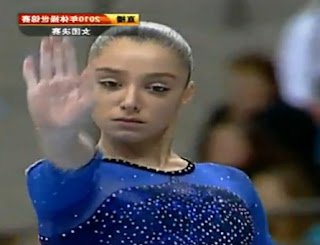 There is great debate about who deserved to win the all-around at the 2011 World Gymnastics Championships.  While debate is healthy, it is not a good sign for the sport when the audience feels one gymnast deserves to win and the results say otherwise.  Gymnastics has become exceedingly confusing.  Many of the expert commentators announcing the event felt Viktoria Komova deserved to win the event.  The truth is that Jordyn Wieber and Viktoria Komova both left the door open for the judges to deduct in the competition.  When that happens, politics and the critical eyes of judges come into play.  One's vision of the 'ideal gymnast' also has an impact on their opinion of the decision.

For those who have watched the sport for decades, it is clear that Viktoria Komova's classical gymnastics is obviously superior.  Those who began watching intently during the last decade may appreciate the power of Jordyn Wieber more and feel that gymnastics should be more about skills.  The FIG has given statements that they aren't pleased with the direction of the sport, yet their own policies and open-ended judging system sent the sport on a roller-coaster ride to becoming an obscure sport like aerial skiing and the luge.

When difficulty was 'moderately' limited, the audience was able to feel connected to the gymnasts in a way that doesn't come through under the current iteration.  Floor routines used to be performance art, but now they involve mostly arm waving while the athletes rest for difficult tumbling runs...that they have to jam their ankles into the floor to stick.

While every sport needs progress, it is important to realize that we actually saw a greater diversity of gymnastics back in 1999 and 2000.  At the time, the overuse of the wolf jump was groaned about by everyone.  The sad part is that the sport has become one cheap wolf jump combination where having a coach who can 'work the code' often times exceeds athletic ability (see Lauren Mitchell.)  Watching bar finals from Sydney, Teza, Produnova, Ling, Yang, Khorkina, Karpenko, Zharganova and Roschupkina each had their own individual styles and skill selection.  They didn't each have to do the same skills to reach an optimal start value.  The final was actually more interesting for judges and viewers alike.  The innovation was actually far greater.  It didn't matter if Produnova was doing a bar routine, the crowd sensed that she was an aggressive girl whose way everyone should stay out of.  Khorkina was a lanky diva longing for a cinematic career.  Now, the routines are marathons and the athletes are forced to become robotic in order to achieve greatness.  There are rare gems who are able to combine artistry and athleticism, but they are few and far between.

When the judging of the sport went open-ended, it was partially in respond to judging controversies.  Scoring systems do not solve biased judging.  Sadly, the bar routine of Aly Raisman in bar finals shows just how political the sport can get.  A routine that should've scored two points lower would've been awarded a score that was points higher than Aly has ever received had she executed it without serious errors.

If a sport is going to sustain interest, it needs stars.  Love of hate her gymnastics, Aliya Mustafina is one of the leading personalities in the sport.  Her attitude on and off the floor engage, offend and perplex those who follow and cover the sport.  In short: the girl has star quality.  Injuries may always occur, but the rate of injuries has increased to a point where one can not perform up to their top level at the European Championships, lose and look for redemption five months later at Worlds.  The three biggest stars from Europeans: Mustafina, Dementyeva and Izbasa were all either injured or burnt out and past-peek by the time Worlds rolled around.  Success in the sport becomes a game of Russian roulette where luck has just as much to do with competitive success as preparation and mental acumen.

Where is the sport going?  Is Jordyn Wieber the goal?  Is Komova the goal?  Bruno Grandi was thrilled when Nastia Liukin won gold in Beijing because it was proof that 'his code worked.'  That was not exactly accurate, as Nastia spent two years being injured at the big meets and didn't have the type of sustaining competitive rivalries that would've been beneficial for the sport.  Beijing was her moment.  It is rare for multiple winners.  Kohei Uchimura needs to be kept in a bubble for the next ten months should Bruno's code have any merit in London.


Like many of you, I want to feel invested in the sport and its competitors again.  I want to see Komova cry tears of joy and sadness, but I also want to see theatrics on the actual competition floor.  Adding a leap to a pass doesn't impress me much when it becomes rote.  It was exciting when Dominique Moceanu added a straight jump to a front full because it displayed individual expression.  Seeing it on every tumbling run becomes monotonous.  I don't care about cheap combinations that won't be worth anything in another year.  I was to see four layout stepouts on beam.  The best gymnast should be the best gymnast, not the best code whore.

Sadly, many of the top performs at Worlds will likely not be competing or in top shape at next year's Olympic Games.