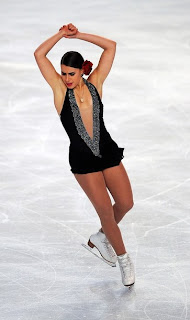 The sixth and final event of the Grand Prix series is upon us.  It certainly feels like it has been a half-baked start to the season after all of the injuries, retirements and downright shitty skating.   Once again, we've have to witness Miki Ando winning two international events and act like it didn't make us want to kill ourselves.  We support Miki's improvement the same way we applaud Bristol on Dancing With The Stars: with severely clenched teeth.


The ice dance event continues to bore, stupefy and even confuse fans and skaters alike.  As much as we may miss watching Russians dress in brown face, we need to accept the short dance as a sad way of life. 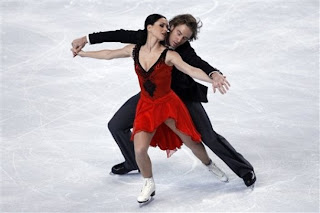 Pechalat and Bourzat are the undisputed queens of the short dance this season.  Having now competed in five significant competitions, they seem to have it a bit down.  They have performed with polish and stability at events with high-scoring judging panels and look to be the biggest thorns in Meryl Davis' backside.  In the trite words of Scott Hamilton, "their greatest strength is their lack of weaknesses."  Their elements do not cause you to gasp with their brilliance, but everything is classy, proper and non-offensive. 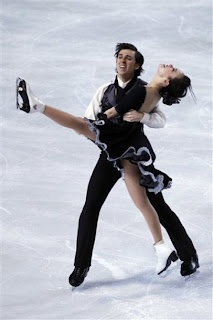 Madison Chock and Greg Zuerlein have also shown substantial improvement since Skate Canada.  Their tribute to "Edith Pilaf" (thanks Tanith) is helping them to mature.  Madison has always appeared like an "early bloomer."  There is something about her on-ice presence that screams "I was every boy's first kiss."  Unfortunately, it does not help her baby-faced partner look any more mature.  With their vehicles this season, Greg is managing to appear like he may soon need to buy some shaving cream and antiperspirant.  The majority of their elements are clean and precise.  He is really starting to project to the audience.  Their free dance has brought out his inner gay and try as he may, he can't stuff it back inside.  When you watch them, it is evident that they are more influenced by Igor and Marina, but that isn't to say that they have all of Naomi Lang's worst qualities.  Aside from some posture issues at times, their biggest noticeable issue was their loss of speed during their twizzle sequence.


For the ladies, it was another event to forget.


Alissa Czisny surprised no one by failing to continue her wave of recent success.  This performance wasn't a complete meltdown, but her skating appeared slow and tentative at times.  Her jumps are still a "work-in-progress."  There are signs of rotational improvement, but Tara pointed out that she still spots her jumps in the air.  This only adds to her wonkiness in the air.  It is improving.  Perhaps Alissa will have it all together by her tenth trip to the Olympic Trials?

Question: Does anyone else find themselves chuckling when Tara points out "that was the jump that really cost Alissa at Nationals." Or "a lot of people have really wrote her off after Nationals."  THAT was the jump?!  What about the others?

Cynthia Phaneuf is also "regaining her jumps following a growth spurt."  AKA: Time for a new excuse.


Mirai Nagasu performed another strong short program.  Frank's toe-jump technique is paying off and Mirai is rotating those babies.  She has lost a good 3-5 lbs since Cup of China, which means that Frank is grinding her ass into gear.  Mirai is aiming to "do her best" in the long program.  She isn't banking on a victory; the girl is ditzy, but not a complete idiot.

Her short program is beginning to come together.  Without a real shot of making the final, Mirai looks like she'll have enough time to get her shit together by Nationals.  Even without her triple-triple, Mirai's short is competitive with the top ladies.  If Mirai can stay healthy and train hard, her natural talent will take her to the top of the podium.

Kudos to Tara Lipinski for actually mentioning Michelle Kwan by name (and as part of a reference that didn't involve talk of beating her at the Nagano Olympics.)  She said that "skaters like Michelle Kwan and Kurt Browning, you really felt like you knew them when they skated.  Mirai definitely falls into that category."


Haruka Imai continues to impress on the Grand Prix.  Her skating needs maturity, but one cannot help but be impressed by her level of effervescence.  She is simply a joy to watch.

On the other hand, Mao Asada makes me want to light candles in church.  There may not be enough cathedrals in Manhattan to buy enough prayers for the reigning world champion.


Now that Mao has left Tarasova, it is evident that her poor fashion sense is likely her own doing.  Mao has returned to wearing dresses that emphasize her non-existent breasts.  Skating to some trite tango, the joy appears to be absent from her skating (as well as the ice coverage.)  Her jumps need months of work.  One needs to wonder if she should've taken time off like Yu-Na to really get herself together at her own pace, without risking her reputation.  Hell, she's lost to Caroline Zhang this season.  Now she's behind Suguri.  I'm beginning to question whether Nubuo Sato has the fiery temperament necessary to slap the success back into Mao.

Then again Mao may not be to blame for her success, it could very well be the apocalypse with Cynthia Phaneuf and Kiira Korpi winning Grand Prix short programs.


Kiira is a lovely skater who reaches over the rainbow to show the audience her put of gold.  Everything about her skating is "nice" and "lovely," but she may not be enough of a bitch to sustain her recent success.
Posted by OlympicEffect at 7:52 PM