This and That (Catching Up Edition)


Brandon Mroz landed a killer Quad Lutz at the Colorado Invitational.  With his new programs from Jeff Buttle, Brandon may take his skating up a few notches this season.

Sorry for the lack of updates the past two days, life has gotten crazy busy.

Mackenzie Caquatto was injured on her beam dismount at the World Selection Camp.  There are already those blaming Martha or the camps in general for her injuries.  The truth is that the sport has become exceedingly difficult.  Dominique Moceanu continues to blame the powers that be for every injury at camp, but this one seems like more of a fluke.  There are some truths here--Macko Caquatto's strength is that she is an all-arounder who excels at bars.  She is not an event finalist on bars.  Macko doesn't have the execution, the amplitude or the difficulty to be competitive with the best bar workers in the world.  If she wanted to make the team, she needed to be available on multiple events.  Macko is not the world's greatest competitor, though she has improved over the last few seasons.  She was a feel-good story when she made Olympic Trials and good for her for making a world team.  She is not the type of talent to make multiple world teams.  This isn't 1997 when we took anyone to Worlds.  Macko isn't in the world's best physical condition either.  She did need to do a double pike beam dismount to be usable.  When she did it, she landed short and injured herself.  For some to say she shouldn't have had to do the beam dismount, they're wrong.  The US is not going to send someone to worlds who dismounts beam with a double full.  Macko isn't good enough to be taken for one event.  The only gymnasts taken for one event have been Nastia Liukin in 2006 and Annia Hatch in 2004.  Chellsie Memmel was kept for one routine in 2008.  Macko is just not that level.  Hopefully her ankle will heal and she'll have a successful collegiate season.

Macko is lucky that she isn't competing for Peggy Liddick who would've issued a callous statement that the loss is sad, but we've already more than replaced her.

Chellsie Memmel is supposed to throw her full bar routine at today's competition.  She did parts of her bar routine the other day, but she did not throw the full difficulty she is planning.  It remains unclear if her full difficulty includes a hindorff+pak salto combination.  Should she nail a set, Martha just might tight her to Worlds.  Hopefully, stubborn Chellsie will one day stop doing the jam on bars and stop twisting that shoulder off the horse on that DTY.

Martha and Kathy are going to be downing some booze tonight when they have drunken decisions to make that are reminiscent of the decision to put Sloan or Larson on floor in last year's team finals.  With Maroney, Wieber, Raisman and Sacramone locks at this point, the team doesn't have strong bar or floor options.  They have a girl with herniated discs almost killing herself on a senseless double arabian dismount because her coaches can't code whore.  They also have Alicia, a gymnast fighting her sell-by date, who can't stay in bounds on floor, upgrade or stay healthy.  This may be Alicia's last year of being necessary to Team USA.  Frankly, there are better girls on all three of her events.  Who do they take for bars...Chellsie who breaks? Gabby the headcase on other events which could spread?  Unprepared Sloan?  Inconsistent Anna?   What to do with Shawn Johnson? This will require several bottles of Jack tonight.  The gymnasts have not answered this question for themselves.

Alissa Czisny is planning on competing a Triple Lutz+Triple Toe and a Triple Salchow this season.  Hopefully Alissa has spent as much time with a sports psychologist as she has at the rink, because she still crumbled with medals on the line at Four Continents and Worlds last season.  Let's hope she takes another step forward, but it is difficult for a skater to learn how to compete this late in the game.


DWTS started with a thud this season.  The first team got voted off, yet no one cared.  Derek Hough is back and looks as amazing as ever.  There isn't a standout talent yet, so the cast just isn't seeming that special after getting past the Chaz Bono novelty factor.  Carson Kressley was as annoying as ever---he brings a new meaning to 'gay for pay.'

Laetitia Hubert is going to skate at the ladies on ice show in Atlantic City on December 3rd.  I need to be there to witness this. 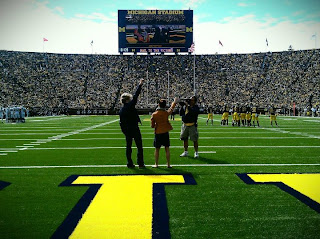 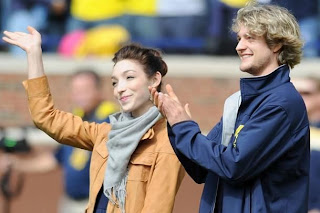 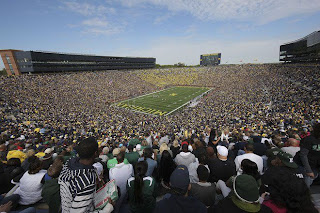 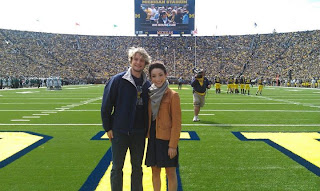 The University of Michigan honored Marlie during this weekend's packed football game.  They will be skating at this weekend's Fashion on Ice with Alissa Czisny, Johnny Weir, Jeremy Abbott, Sasha Cohen and Sarah Hughes.  It looks like this Disson production has a hint of a budget.  It could be good, even if the camera will spend more than half the time on Aretha Franklin.  I guess the queen of soul deserves it.  Kudos to Disson Skating for not forcing us to endure performances by Ashley Tisdale or Raven Symone.

Beastly Beth Tweddle has another tumbling pass to take on the world with.  The girl is unreal.


Team China is preparing for Worlds.  The coaches are saying that Huang Qiushuang may be moved up from the alternate position.:

Kanaeva is dominating RSG yet again.  These are videos from qualifying, both of which apparatus she earned gold on.:

Posted by OlympicEffect at 7:14 AM