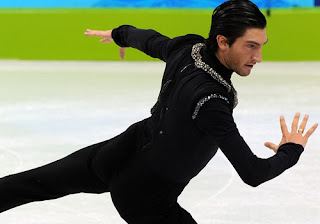 Evan Lysacek told Phil Hersh that he isn't ready to commit to Skate America.  With the event just weeks away, it sounds like he won't be there.  Evan brought up that he lost the weight he needed to but still needs to gain more muscle mass.  I'm sure we'll be hearing about him drinking protein shakes with Ronnie and Pauly D any day now.  Evan isn't going to come back unless he is in top form.  He is not going to have the type of return to competition that Shawn Johnson has the Classics two months ago.  Frankly, if he wasn't in top form, he'd get hell for it from the press.  Evan says his goal is still Nationals and Sochi.  He hopes to be in fighting form by next season.


Mirai Nagasu won gold at Nebelhorn and actually won a long program.  Mirai's short has a ton of potential and shows growth, but she still needs the discipline that is going to take her over the top.  If she wants to compete with the top girls, she is going to need to get in better physical and mental condition.  Once again, Mirai's flip and lutz were underrotated in the long. Both lutzes received edge calls. She also underrotated a double loop.  Mirai's posture could be better in areas and her overall footwork can be sold with a bit more authority.  It is good to see just how improved Mirai's triple loop has become under Frank Carroll.  Her double axel is also landed with such authority.  Mirai does look to be light years ahead of her condition at Glacier Falls.  She certainly won't peak too early, but she never does.  The challenge for Mirai will be to take her skating up to a level that it has never been before.  Time is running out in terms of the federation believing in her 'potential.'

Volosozhar and Trankov are really upping their level of difficulty this season.  It has become obvious that they are advised by Tarasova in terms of their on-ice performance because they are beginning to struggle as her students typically do when she ratchets up the content of the programs.  V+T have gold in Sochi in mind and they need to be upping their game and developing consistency.  This season will not be as smooth-sailing as last season and it is already evident.  Their programs do not look sharp or performed with conviction by any means.  There is going to be an extensive learning curve over the course of the season and their final lift in the program shows just how exhausted they must be.  I predict errors on the side-by-side jumps and throw triple flip throughout the Grand Prix. Last year, their long program was never as solid or as well presented as their short program until the actual World Championships.

Johnny Weir will be performing to Lady Gaga and Ave Maria at Fashion on Ice.  It is nice of him to get new programs.

No surprise, Kanayeva captured AA Gold and swept RSG Worlds for the second time.  It was her closest competition of the week.

Behind the scenes of All That Skate Summer

Posted by OlympicEffect at 8:51 AM