Battle of the Blades Update

This show works because it is well-produced and takes itself seriously without relying on cheese.  And they have hot hockey players and pretty girls to look at.

A calculated interview with Tanith Belbin where she appears to be campaigning to be Miss North America.  She may have jumped ship to compete for the US, but she is counting on Canadian support.  She may even say 'eh' a few times.

Sadly, hockey player Wade Belak was found dead in a condo at approximately 1:33 PM on August 31.  The cause of death has not been confirmed, but his death is the third in a series of recent deaths by hockey players in a four-month span that are believe to be caused by either drugs or suicide.  Belak's mother said he had been suffering from depression. 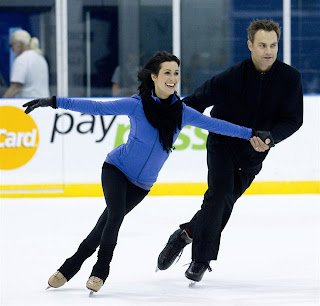 Posted by OlympicEffect at 7:55 AM