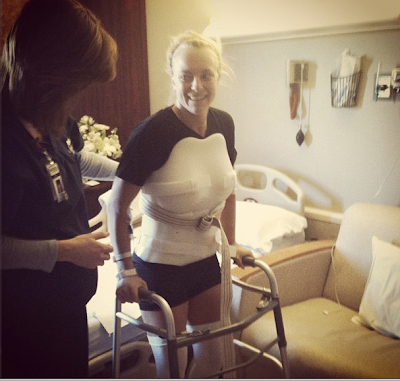 As many of you may know, one of our favorites, feisty Kayla Nowak fell while practicing on the Uneven Bars on Tuesday and suffered broken back. Nowak suffered a fractured T12 and her T11 slipped forward. Rushed into emergency surgery, doctors attached bone from the back of her pelvis and fused it to the two vertebrae, holding it together with four screws. The Boomer Sooner senior's spirits have been remarkably high and she already began walking today with the aid of a walker after being fitted for a brace. Kayla actually wished to walk yesterday, but they had to wait on the brace.

Her family, friends, teammates and boyfriend (hottie Jake Dalton) have been a nonstop presence in the hospital. Aunt Joyce first fell in love with the Boomer Sooners after meeting sassy mother Donna Nowak at the 2010 NCAA Championships. The love has only grown.

Kayla Nowak had previously gotten into the best shape of her life for her senior campaign after suffering an injury immediately prior to last year's post season. After several horrific injuries have plagued the sport in recent months, the gymnastics community is tentatively sighing for relief that signs appear to be extremely hopeful that Kayla will make a full recovery. 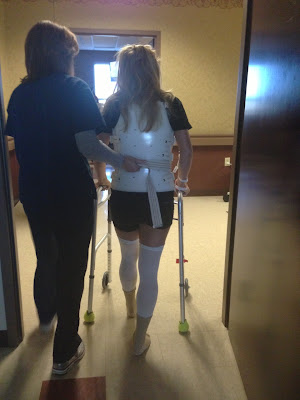 Posted by OlympicEffect at 3:23 PM