Another Look at the Florida Gators 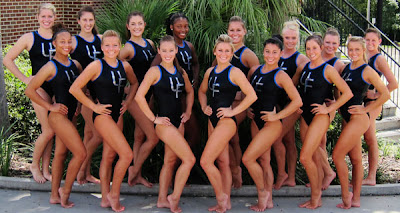 The Florida Gators hosted an intrasquad open to the public this weekend and showed that they are very much the team to beat this season. Though they are not the reigning champions, many still feel they were the best team at the NCAA Championships and have more than earned their due to break into the select few schools ever to win an NCAA crown. Coach Rhonda Faehn has an abundance of riches this season. It is enough talent where keeping everyone healthy, motivated, confident, fresh and engaged becomes an issue while facing top teams and trying to maintain a top ranking and team total from week to week. Leading up to the intrasquad, the team had only been practicing full routines for two weeks. With a Christmas break on the horizon, the team is looking not to peak too early. Competition in the gym has several of these girls looking sharp.

One person who deserves kudos is Jeremy Miranda who really stepped up his level of choreography this season. He expanded on Sloan's signature style to create a great routine, has pushed Alaina Johnson to develop her lines and style further and really capitalized on the crowd pleasing abilities of Hunter, Macko Caquatto and Randy Stageberg. Marissa King appears to have gone back to her sophomore exercise, but it was also popular with the crowd.

With Bridget Sloan, Ashanee Dickerson, Marissa King, Macko Caquatto, Alaina Johnson and Kytra Hunter, the Gators have six top All Around gymnasts capable of winning several meets. The competition within the team may very well drive the team to new heights. While it is always 'all for the team,' these girls all wish to win and some are simply more vocal about it that others.

Kytra Hunter looks ready to repeat as the HBIC of the NCAA. With seemingly no weakness, she is expected to be in the lineup on all four events and challenge for 10s on vault and floor. With her execution, confidence and attitude, she could even put up a top score on bars or beam, with beam being more likely. When she sticks her 1.5 Twisting Yurchenko, it will score huge. Her second pass on floor is unique and really adds to the overall impression of power, flight and sass that she gives off on floor. Kytra does not look to be one who is happy with second place, for her team or as an individual.

Bridget Sloan is the top freshman and looks to be capable of easily earning the SEC Freshman of the Year award. After a few critiques that she was not in tip top form, she looks to be getting in better shape compared to the last video and her tumbling passes on floor are already much improved. Known as a procrastinator with her training in the past, this natural talent may finally reach her potential with so many meets to hone her skills and mental focus. The 2009 elite season may have been her peak, but I fully anticipate another breakout year from Bridget Sloan. The routines are there on all events and she has always been a girl who can find her landings. This is one top recruit who is living up to her hype.

Alaina Johnson looks lovely as always. Always beautiful on bars, vault and floor, Alaina's beam looks more confident this season. Her side aerial+layout full dismount is not the toughest dismount, but she does it well and executes a clean routine. Beam is not the team's best event, but it is far cleaner and more stylish than ever before. Rhonda has never had bar and beam lineups with such toe point.

Macko Caquatto is back healthy on all four events. The tenacious gymnast is always looking to compete on all four events, yet the coaches will need to balance her desire with the need to keep her healthy. Look for Macko to see action on all four events, yet her return to the beam lineup may be the most exciting for the staff. Macko is playing some smart strategy on bars by getting rid of her same bar release. Her flightly transition sequence is more than enough and it is eliminating a potential handstand or lack of amplitude deduction. Expect big scores from her on bars and beam.

Marissa King is always an ace for the team. After stepping it up on bars and beam last season, she looks ready for her best season yet. Though she may have to fight with fellow senior Ashanee Dickerson for a spot in the bar lineup when all the top guns are available, she looks capable of getting the team off to a strong start on that event. Her Tsuk 1 1/2 has been consistently landed well in both videotaped intrasquads, which may be due in part to her foray into elite competition this past summer.

It is amazing that Ashanee Dickerson, the rock of the team, may be pushed into a leadoff position on several events, but it is not due to her diminishing talent. Mentally steady in competition, her gymnastics hasn't changed much. There are always a few form issues here and there, but Ashanee is one to get the job done. She is prepared on all events as always.

Bianca Dancose-Giambattisto (I never wish to type out that name again) had a rough bar routine in the intrasquad, but her gorgeous look on bars should earn her a spot in the lineup by midseason. The team may very well push 49.5 on the event due to the addition of Bianca and Bridget Sloan.

Bridgette Caquatto is coming off on shoulder and knee surgery, but is expected back in the lineup by February. She is likely to contend for a spot on vault and bars. It is said that Jeremy has really done miracles with her, as she is not known to be a dancer on floor. (We can only remember the horror of her using Anna Li's freshman-year floor music.)

Randy Stageberg will lead off beam again and looks to be back in the floor lineup. Her piked full in can be a tad low, but she is consistent and the judges typically score her well on floor.

Rachel Spicer didn't compete in the intrasquad due to a sprained elbow, but she is expected to be fine for the season and in contention for spots in the vault and beam lineup.

The most improved award may go to Kiersten Wang who appeared in danger of falling off the Gator gymnastic map last season. In the mix on all four events, I wouldn't be surprised to see her given exhibition and lineup opportunities on several events throughout the season, especially when others need to be rested.

With so many options, the coaches will need to make tough choices. The pressure will be on the girls to hit, as they may not be given too many opportunities to prove themselves with so many of their sun-kissed sisters ready to take their place. This year is all about redeeming the narrow loss of last year and making sure it never happens again. With talented freshmen and improved upper classmen, the Gators look poised to get in done in Westwood this April. (And couldn't that explain whatever the hell was going through Miss Val's mind when she crafted those routines this year?!)
Posted by OlympicEffect at 5:07 PM