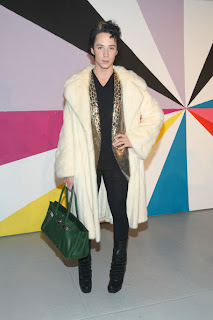 Johnny Weir announced that he will not be competing at the National Championships in Omaha this season. For many, this is not a shock. Personally, I am surprised that he did not wait any longer to withdraw. His exit is curiously, un-Johnny. He has simply stated that his performances did not go as hoped and that he would be taking time to train for the Sochi Olympics.

It became quite clear this season that Johnny's desire to make another Olympic Games was a long shot at best. After narrowing making the 2010 Olympic Team, Johnny's technical level would have to improve to make another team. Oddly, Johnny appeared to attempt the big ticket elements in the short and long without the requisite training. When Johnny Weir continually lands awkwardly forward on his toe pick on his trademark triple axel, something is amiss.  Though he has never cleanly landed a quad in competition, Johnny put them in both programs. He payed dearly and was never in the mix in competition after a double downgrade. The programs displayed a lack of stamina that made it clear his training was not there. Was he nervous about the comeback? Did he see the level of competition and panic?  Did married life cause him to lose his nerve? Was he distracted?

With so much shifting happening in the men's field at US Nationals, a clean eight-triple long that was well trained with fast spins and crisp steps would've kept Johnny in the mix. That did not appear to be on the way this season and what he decides to do next is anyone's guess. Last year, Johnny posted clips of himself training quads and triple axels that showed he is very capable of doing them physically. Whether he can get the job done mentally is always another story. The mind of Johnny Weir is a curious place. Whether he competes again or not, this will surely not be the last we hear of him.
Posted by OlympicEffect at 6:41 AM