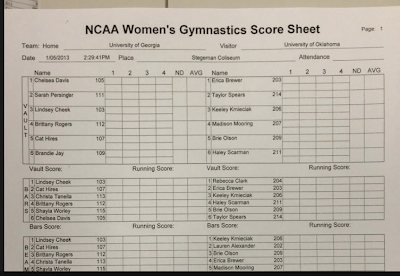 The showdown is here. Last spring, the University of Georgia fired coach Jay Clark and attempted to hire Oklahoma's head coach, KJ Kindler. They ultimate hired Cal's coach, Danna Durante, who has a lot to prove in her first outing as head coach. As UCLA Val Kondos Field has said in the past, you often have to be twice as good as the other team in order to win on the road.

It looked like this would be Oklahoma's meet until they lost senior Kayla Nowak just before Christmas to a broken back. The Sooners have to step it up and be stars in an often unfriendly arena. The Gym Dogs do get a boost in terms of Brittany Rogers, who is just joining the team this semester. With three years of underachievement that resulted in their coach losing his job, the Gym Dogs have a lot to prove. On paper, this should be one heck of a match up.

Missing from the lineup: Noel Couch.

Note that Carole Ide, one of Suzanne Yoculan's closest friends, is judging bars and beam. She was present at a Gym Dog wedding this summer. Will she be friendly to the new Georgia program?

Georgia looks particularly strong on vault tonight with a lineup including Jay, Rogers, Cheek, Hires and Davis. It will likely come down to the landings, but the form and dynamics of the vault should matter. Haley Scaman will certainly give them a run for the vault title and could compete the Yurchenko 1 1/2. She rocked it in JO competition all last season. 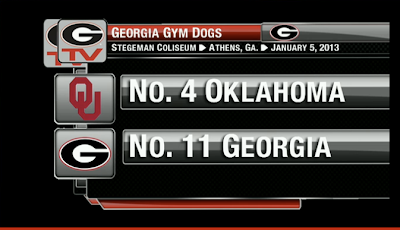 Perpetually injured Lindsey Cheek is slated to compete tonight. Jay Clark always considered her an X factor for the team. She may just deliver a year too late.

Call it: How will Shayla perform tonight?

Kevin Copp is in a suit. Is it doing anything for you?

Is Danna too relaxed? I am not used to a female head coach who is two minutes into an interview and has yet to make a cutting or passive aggressive remark.

All of this talk about energy makes me think that we are doing bikram yoga together and I can't leave the room when nature is calling, because it will cause me to disrupt the 'energy' of the room.

Kevin Copp cannot even contain himself over this year's home schedule. 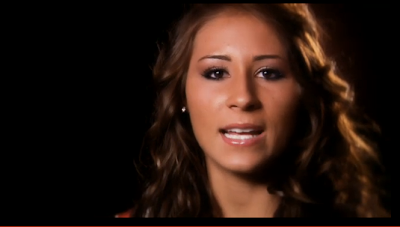 Only in the South do they still play 'Who Let The Dogs Out?'

Kevin Copp is saying that the coaches around the country obviously have respect for the programs based on their current ranking. Number 11 is exactly a compliment compared to what the program once was.

Noel Couch is out with a hand injury and listed as being 'week to week.' They also mentioned that she had a foot injury in December and was peaked too early. They are already discussing her being in another role. Those are not great words to utter... it makes you wonder if she will be out for longer than a meet or two.

Oklahoma has four all-arounders tonight, which frankly has never happened under Coach Kindler.

Chelsea Davis- YFull- step to the right and a big bend at the waist. Steady, not great.  9.625

A much fitter Sarah Persinger looks like a star this season already with a gorgeous Y Full (slight pike, but nice toes.) 9.825

Kmieciak- Fall on her Ray (toe on hecht), stuck full in, full out dismount. Could've been a steady score. They need to step it up.

Rogers- Sturdy vault with a .1 to .15 step back. Tries to flair it out, but the flair really required a gorgeous stuck Zmeskal landing.  9.850

Scaman- Solid effort, much improved over her JO efforts, but some short handstands that will add up. Also a twist in her shoulders on the shootover catch.  9.875 (a bit high)

Spears- Gorgeous WOGA bar routine. Small hop on the double back with a half dismount (not a true fontaine.) 9.875  Living for her toepoint and extension.

Oklahoma is steady, but they need to get the nerves under control and really get it together on vault, as they missed an opportunity to really contend with a strong bar rotation. Only 10 minutes until Shayla does her bar dismount.

It looks like Brandie Jay may exhibition bars. The Oklahoma blondes need to stick to put the pressure on the home team.

McComb says the Gym Dogs look like it is February or March...standards have clearly changed since the Kupets era.

Cheek- Very strong bar routine. I would never call it beautiful, but it was certainly powerful and dynamic. The form could be better at times, but it is strong.   9.850

Hires- The new UGA double layouts by Hires and Cheek are wonky, but she has much better extension than Cheek. A bit wonky on the shootover.  9.825

Mooring- Hristakeava-with a hop, but tons of flair. Steady. They need to find the landings. 9.800

Tanella- Less labored than in the past. Small hop on the double tuck, but she looks much better on bars.  9.775

Rogers- Great swing, going to a be a great routine. Low dismount with a step and a short shootover, but the swing and stalders were gorgeous. Stalder+hecht.  9.800

Price- Handspring pike front with a big step.  The Sooners could just not manage to land or get momentum. This was not a great rotation for them. Missed opportunities, but no disasters.

Davis- steady routine. Odd to see her in the anchor position. A bit of a 'college stick' on the landing.  9.875

Jay- solid bar routine. Should see her in the lineup very shortly.  9.825  (Exhibition)

Oklahoma is falling victim to the momentum of Georgia at home. They are simply not on fire yet and part of it could be an unstated lack of confidence due to losing such an important contributor. Brewer was scratched from vault, but the team simply lacked the attack needed to apply the pressure. It will take one hell of a pep talk to really right the ship and make up four tenths. They are a strong beam team, but they cannot afford wobbles today. They really need to turn this around and have the intention of dominating the second half, because the Gym Dogs are competing as though they have something to prove. 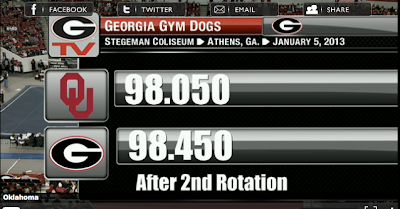 Beam Lineup: They appear to either be hiding Kaylan Earls due to form or hoping the judges will reward her double back. It is rather amazing that Brazeal is still exhibitioning as a senior when Hires hasn't trained beam for two seasons. 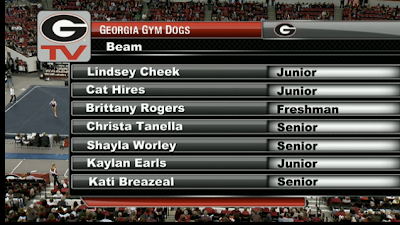 Cheek- The Moonwalk needs to go. She is very Kelsey Erickson. Small balance check at the hips on the two bhs+layout stepout series. Side Aerial- slight check.  Moonwalk. Explosive leaps. Stuck gainer full dismount.  Solid leadoff effort. Lacks the beauty, but you can't argue with the consistency and amplitude.  9.800

Albright- very WOGA in college routine. F Double Full (step), Back 1 1/2+Front Layout Full (WOGA combo tumbling excellence) FHS+Rudi (slight bounce back.)  Clean execution. Could use a double back in the routine for a higher score. The judges may nail her for not double flipping.

Hires- Fall on her BHS+layout+layout series. Olympic Gymnastics theme playing. Is anyone else sick of this yet? Stuck Cartwheel+Gainer Full.  In my mind, Jordyn Wieber is crying.

Spears- F Double Full+gorgeous control. Back 1 1/2+Front Layout, Stunning extension. Great musicality and music.Rudi, small bounce.  Good routine. Again, could use a double back to make sure she goes 9.900 with a hit routine.  9.850.

Earls-  BHS+Layout+Layout, delayed wobble (turn to the side), Side somish variation, Double Back- big step back.   9.800 (too high)

Scaman- Double layout, FHS+Rudi+Layout Stepout (so many rudis) Looks like she needs some more time to sell the rather tribal choreography. Double Tuck.  Her best routine of the day.  9.875

Brazeal- One of four WOGA girls competing. BHS+Layout. Beat jump+stag jump. Leaps could have a touch more amplitude. She is more of Nikki Childs the elite years compared to Nikki the college years. Combo dismount.

Oklahoma is digging into the lead a touch.

The lead could've been cut into a bit more with the scores from Worley and Scaman. 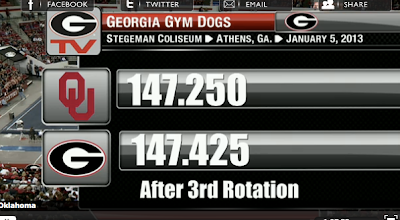 Catching up with our love, Kat Ding.

Earls- Double Pike, Bouncey rudi landing on the 2nd pass. Double Pike.  Solid landings.  Would like to see more difficulty from her given the power she has.  9.850

Clark- Gorgeous GAGE technique. Aerial+BHS swing down, Balance check on a scale (UGH), Split Jump+Sheep Jump, Side Somi, Missed a foot on her round off+ 1 1/2 dismount. Shame. It has the potential to be a stunning routine. Kills the momentum they had going. Such gorgeous work otherwise.

Persinger+Front through to Double Tuck. Surprised not to see her on beam, Double Pike, LOW.  Oklahoma needs to nail now. The door is opening. FHS+Rudi (Rudi overload today.  Devalue them and combo/series dismounts.)  9.375

Oklahoma needs to stay on.

Jay-Double Tuck huge steps back (why are you mounting with that as an anchor?!), F Double Full+Punch Front, Gross double pike dismount to her hands.

It all came undone for Georgia in the second half, while Oklahoma turned up the heat. 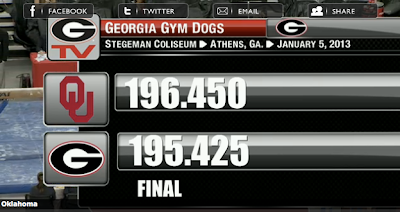 KJ must be THRILLED.  The Sooners really turned it around after a flat first half. Rough finish for the Gym Dogs, who really look a lot better under the newer coaches in many ways.

Posted by OlympicEffect at 12:44 PM