The pairs were merely a warm up. Let the competition begin. The opening ceremonies start at 8:00, so I will be live blogging starting at 8:30. Until then, I will be conditioning like a good figure skater. I do not understand the opening ceremonies, as I can see little girls fall on the ice for $13 an hour any day of the week.

Now the mayor is speaking...

I'm bored of the short program just listening to the elements being described. Imagine if they had to describe the figures!

Did anyone else live for the Mirai mini documentary with her coaches kicking her ass into gear and forcing her to do a ton of off ice training? I found it oddly cathartic after watching her for many years. 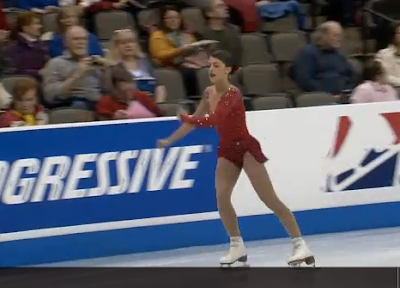 Samantha Cesario- Carmen Muzak Fantasy- Music suits her presentation style. Triple Flip+D Toe, Double Axel, Feisty Skater, Lovely Fratianne sit position, A bit slow, Triple Loop (possibly < check, but looked pretty good), She is always a skater who looks so confident in the summer and burns out by Nationals or is injured. Looks steady and strong, but is missing some of the spark that really sets her apart in person. Love her packaging, as always. She has been held back in her progress by her injuries that past two seasons. Such a lovely skater, but needs to really stand out a bit more at this level and break out from the middle of the pack. 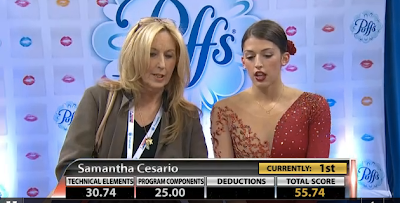 Mirai Nagasu- Frankless this season. Looking better?  Mirai has more attitude and fight this year. Not nice and smiley.  Telegraphing majorly into 3Toe+3Toe, High, complete 3 Loop, Double Axel. She may beat Ashley tonight if this is marked accurately. More speed and attack. Strong spins.  Good GOE all around. Not my favorite program from her. Could really earn more points by putting her Triple Loop in the second half, but she might risk getting the rotation all the way around. The top 4-5 girls could be quite close this year. It may come down to details.

I don't buy her PR statement of wanting to skate well. She wants to be back in it. She needs the funding and is a much better skater than last year's result. That program meant business.  Much different reaction from her coaches than last year. I live for her discussing the pressure of forgetting to say hi to people in the Kiss and Cry, 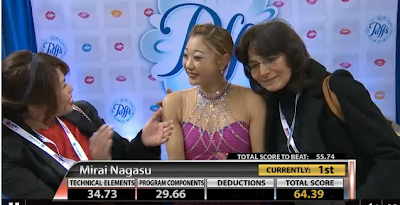 Angela Wang- Always stereotypical Asian-themed music, which I live for.  Improved speed. Triple Lutz- Fall. Triple Flip+Double Toe, I think she did a double axel, but I got a bit bored and asked my friend why every one of her program selections must have Dragon in the title. We get it, you're Asian. Show us some consistent flutzes.  She looks ready for some angry tears. Coaches look annoyed. I don't think 'patience' will fix her lutz. 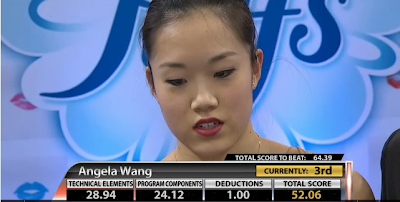 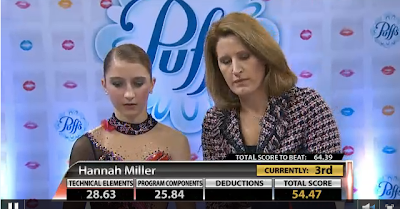 Haley Dunne-Lovely lovely skater, Triple Flip+Double Toe, Belongs in the Peggy Fleming era, Single Lutz, such a shame, as she has had a greats eason. Killer layback. Serious skating skills. Could have more speed. They would give her big marks with more speed and landed jumps. Stepped out of Double Axel. This program is getting away from her. The short is usually her event. Sadly, she may be buried tonight and is a much better skater than that. 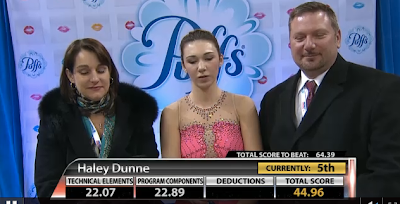 Next warm up group is on the ice.

I need more Jef Billings dresses in my life. The other dresses simply don't compare. I wonder if a skater could even afford all of that hand beading. 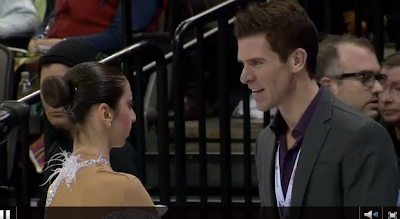 I love when a coach spends more time on his hair than his ladies competitor.

Yasmin Siraj- 3Toe+3Toe, Shaky Triple Lutz, Double Axel. Solid, but nothing was truly special. Yasmin has talent, but something needs to change in order for her to break out of the penultimate group at Nationals. 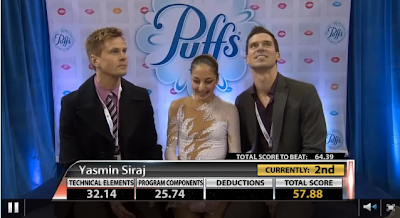 Courtney Hicks-Clunky free foot, Triple Flip+Triple Toe (Good GOE), Huge Triple Lutz, Tripped on a back crossover. Double Axel. Blah program. The injury has held back her development. Just isn't quite where she should be artistically. Great spinner. Fabulous speed on her spins. I cannot keep track of all of her coaching changes. It is a tad ridiculous. 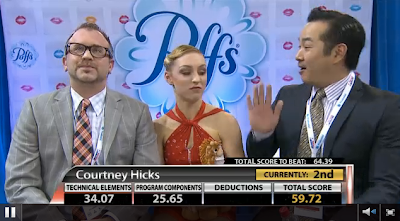 Amanda Hoffman- Stairway to Heaven, Inventive choreography that she really owns. She won't be rewarded for it. Triple Loop+Double Toe, Triple Flip (<), Basically a 1.5 Axel-total waxel. Of course it all went downhill after the cool opening choreography. It was truly the best part of the program.

Scored a 42...couldn't get a good shot because she kept leaning down.  In 8th. 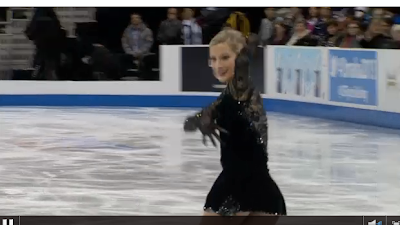 Becky Bereswill- So regal. Blowing this. Prettiest Hitchcock blonde since Jenny Kirk, skating to my favorite song ever. Jason and Yuka run a triage. They need a sports psychologist at the boards at all times. This is a disaster. Triple Lutz (<<), Triple Salchow+Double Toe Attempt (Just no), Double Axel (had to seriously fight for the landing). Yuka and Jason should be like lawyers who don't get paid unless you win your case. 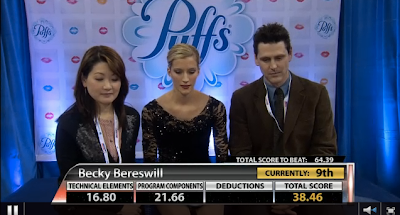 They are now showing Peggy Fleming's 1967 winning free skate, which was actually a better performance than anything we've seen thus far.


Would you coach with someone you're in the process of divorcing? I'd be throwing their clothes on the front lawn.

I always love the the USFSA tries to hire skaters they have screwed over for years, who are utterly dependent upon them, to do the commentary for Ice Network in order to avoid any controversy or honesty in their coverage. It is disturbing in a true battered wife fashion.

I miss the days when I had hope for Caroline Zhang.

How many times will we hear Kiri Baga is competing in singles AND pairs?  In the words of Miki Yamashita, 'First thing's first. Do one well."

Gracie Gold has been working with a sports psychologist and looks like the spoiler this year in practice.

"Yes, Tonia, we know you were an alternate! #EternalPewterMedalist"-WestPalmBitch


Caroline Zhang-3 Loop+3Loop, 3 Flip, 2 Axel   "That 2A was still slow as hell."-WestPalmBitch.   Tonia admires her 'changing' her jumps because her lutz never changed. Ever.  Caroline is becoming a Nicole Bobek who bombs the entire Grand Prix and then shows up ready to go two weeks before Nationals.  2nd Triple Loop (<)  Still a lovely spinner.  Boos for her marks (downgrades.) 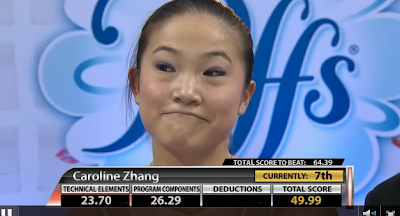 Joelle Forte- Still skating.  Triple Lutz (Still <)+Double Toe, Nice skater, but really does not present much to the audience because she is so focused out there. One of these years, she will learn. Triple Salchow. Double Axel. Music is trite. Nothing truly special. Nothing truly awful. I like her as a skater, but I feel she would be better in a different venue, as she is not improving and hasn't been for several years. 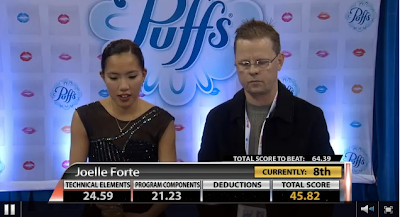 A PSA from AP's Nancy Armour, "If you aren't going to use your music, it will be taken away from you."

Kiri Baga- Fall on a Triple Flip.  Skating to the Mission.  3 Loop(<)+2 Toe. This should be her only time doing both disciplines. With two events in the same day, she is doomed in the long. Double Axel. Lovely skater, but we need to face that her singles career is not going to happen. It was cursed the second she won Novice and it has only gone downhill. Gorgeous layback into Bielman. Without really strong jumps, I do think she is better suited for pairs. It isn't an insult, it is just a reality. 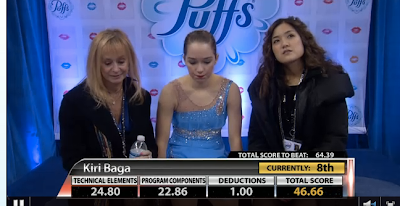 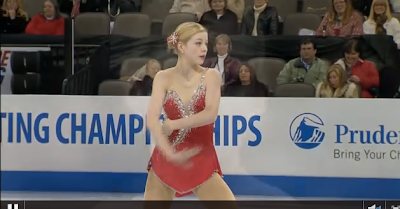 Gracie Gold- Triple Flip+Triple Toe (<) (fall), You just lost Nationals. Triple Lutz, Single Axel. Nationals is over for her. Is going public with having a sports psychologist a curse? Is she ready for Yuka and Jason? 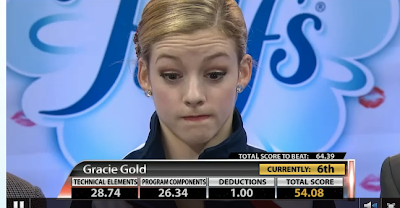 Bart Conner just threw some shade on skating." Is it a sport if what you wear has a discernible impact on your results? "
Aunt Joyce: What about gymnastics when wearing a USA leotard makes the judges overlook your Aly Raisman form breaks? 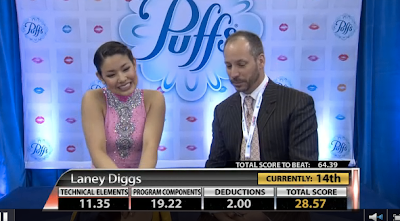 You know it is skating when you tell a former skater that Ashley Wagner had food poisoning and they reply, "oh ,good for her, she'll be so skinny this week!" 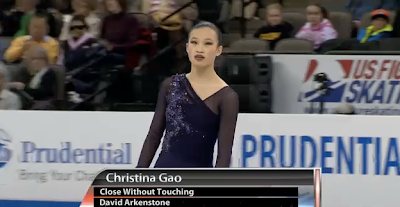 
Ashley Cain- Another Jenny Kirk, 3 Loop+2 Toe, 3 Salchow. Lovely Katarina Witt-inspired dress.  Spins quite slow. 2 Axel. Nice program, but it lacked content. Nice job, could have more speed and difficult jumps to break into the top group in the future. She is definitely 'on the cusp.'

She didn't need the gloves and the judges agreed. 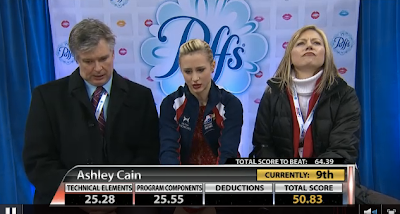 Anna Karenina is already out on DVD. I'm clearly the only queen who saw that long long long boring film.


Morgan Bell- Floor Music.  2.75 Lutz (Fall, <<), I am just giving up. This is bad. No, this isn't bad, it's a disastrous mess. It is good that there are a plethora of Puffs tissue boxes around. She may need them. 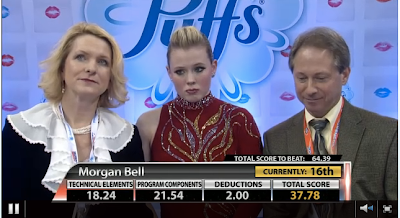 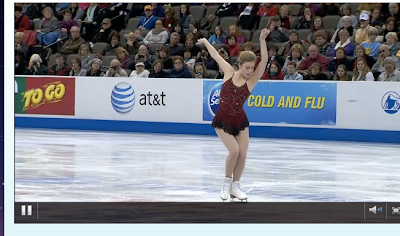 Ashley Wagner is an abstract interpretation of the violin. Ugh, don't tell us these things. Slow, steady and controlled. Sturdy Triple Flip+Double Toe.  Held that landing. Hit the Double Axel+Split. Triple Loop.  Tough performance. Isn't singing, but she is fighting for everything and doing it. She has the desire to win of Jill Trenary and fights that same inner self doubt. Jill had her pitched-forward landings. Ashley has her two foot landings. Triple Loop was a bit shaky, but they should give it to her. Everything was a bit slow and safe, but she was NOT going to mess up a short. 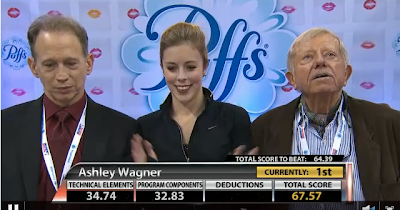 Agnes Zawadzki- HUGE Triple Lutz. BIG Triple Toe+Triple Toe, Slow and steady, I mean SLOW and steady. Double Axel (fall). Mirai may very well return to Worlds. Agnes had it and she just caught and edge and blew it. The judges shouldn't murder her. She will still be in the hunt. Agnes has really lost a lot of weight and gotten back into fighting form to do these triples. She actually works at an organic foods store.

Another hilarious night with the USFSA. God Bless!

Posted by OlympicEffect at 4:50 PM