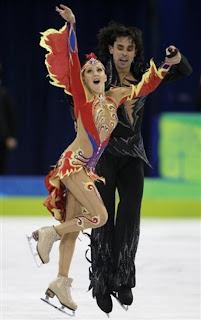 Rachael Flatt is now going to train with lesser-known coaches in California.  Let's hope they overhaul everything and are brutally honest with her about her skating, her style and her technique. She is 'planning' new combos, but also is telling us that she is behind in her training.   For the record, I'm also planning those exact combos in my adult skating program.  I'm just a tad behind in my training.  Personally, I can't wait to hear about which courses she is going to take at Stanford. Rachael's long program music choice for the year is Stravinsky's  The Firebird and I can't get the visions of Caydee Denney's white trash hair adornments out of my head.  The two are soul sisters.  Kudos to Lori Nichol for waiting an entire skating season before recycling music she just gave to Evan Lysacek.  Want to know what it's like to sell out?  Ask Lori Nichol.

Rebecca Bross will see her doctor today.  As of now, the diagnosis is a dislocated kneecap.  Would you trust the USAG doctors?


Team USA is sending Mirai Nagasu, Joelle Forte, Marley and Brubaker, Stephen Carriere and Denney and Coughlin to the Nebelhorn Trophy.  They could all use the experience, though I question the continued investment in Joelle.  She is a feel-good story and I admire her, but I just think other skaters may need this assignment more.

Denney and Coughlin have mighty plans for a team that was merely thrown together on a whim.

An Interview with Oksana Baiul.

Daisuke Takahashi is looking to add a little French flamboyance to his in-your-face skating.

Kemp and King are moving to train alongside Evora and Ladwig.  They aim for second-to-last place at their Grand Prix events this season.  Felicia Zhang and Nate Bartholomay and Christine Mozer and Danny O'Shea will also train in the group.  Kudos to Felicia for continuing with pairs and to Christine for exploring that pairs-curious aspect of her personality.

Kiri Baga performed at the Minnesota State Games.  It has become self-evident that she needs to move away from home and find Russians to starve her, whip her into shape and overhaul her technique if she ever hopes to have a prayer of making a return on her parents' investment in her skating career.


Evora and Ladwig debut their new short program in their old off-the-rack costumes.


I took hell for not posting this lovely during my hiatus.  Kudos for showing the white skates.  It looks like Mao will also skip the Grand Prix this season.:

Posted by OlympicEffect at 7:04 AM