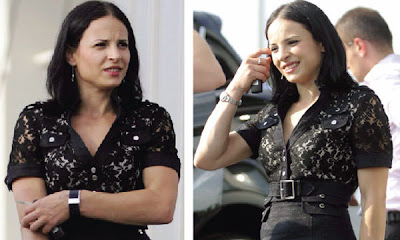 Ioana, our trusted Vampire Whore, translated a recent Prosport interview with Corina Ungureanu.
How is training coming along?
Could be even better. I still need to fix some skills and I’m working
on UB, FX and VT. I only try one vault, however, so that if need be I
could help the team.

What made you decide to come back?
I missed gymnastics and I made a bet. Last year, my boyfriend Jonathan
said he’d like to see me compete once more. It was a joke bet that
came to life.

Your first step…
In October when I competed for the club where I worked. I did an easy
floor routine and ever since I realized I still have “reserves” to do
gymnastics.

Was it hard to adapt?
It is hard and I’m fighting some pain in my tendons. I have tendonitis
that’s really torturing me, but I don’t want to give up now and regret
this later.

What’s training camp like?
I don’t stay in Izovrani. I commute daily to Ploieşti. It takes about
25 minutes and I really like driving. It relaxes me.

Does training with Belu and Bitang feel like déjà-vu?
It’s as if time stood still; everything’s the same. That’s how I left
gymnastics and that’s how I continue thinking about competing.

What is the degree of difficulty of the routines you have?
I only work on separate skills, not entire routines, but I’m hoping to
start linking them soon. On bars, I would have a 5.8 SV and on floor a
5.5. I need to be honest with myself; I don’t have any illusions, only
concrete things that I could get through work.

Is it hard to get ready for the new code?
Every code requires a lot of work. The unevens seem to have gotten
very difficult; it’s very perfection-oriented. The rest remained the
same [shocking to hear a Romanian talk about UB difficulties]
Your first competition…
Romanian Nationals, because that’s how the preparation was thought out.
What are your future goals?
To get a spot on the Worlds team. This is the reason why I train, but
also a test. I said that if in nine months nothing comes together, I no
longer belong here.

and part of her interview with Libertatea

What’s it like training with Belu and Bitang?
For me, it’s as if I never left Deva. It’s like I don’t even feel this
10-year break. With all my heart, I’m glad they are back in the gym as
coaches.

Which of the current gymnasts do you get along with best?
All of them are dear to me. They’re so small and cute. Sometimes I get
nostalgic and I remember how I was when I trained at Deva. I do have
an added admiration towards Sandra Izbaşa who is an extraordinary girl
and very ambitious. I’m convinced that she has the strength to come
back to the training level that she had before the Olympics

Tamarjan had also announced her retirement plans after she finishes
her high school graduation exams.

Grigoras is trying to tip toes around Tămîrjan’s weight problems.
“It’s normal for Ana to think about retirement because she’s had
injuries that ended in surgeries. The recovery time was fairly long;
she’s matured; everything’s changed; these are problems that all
children her age are facing. We are hoping however that she will find
the strength to overcome them and come back alongside us [the team].”

(I love the children bit…The whole problem here is that she’s no longer
a child but a grown woman –with all the curves that come along with
it.)
Evan Lysacek and Joannie Rochette are nominated for ESPY Awards.
Kanako Murakami skated to the Nine soundtrack, because she's so Italian...
International Gymnast interviewed Nelli Kim. Bruno Grandi's right hand is telling us not to criticize the sport because if we don't love gymnastics, no one else will. When the World Silver Medalist goes from Natalia Laschenova to Rebecca Bross in two decades, don't recognize it or admit the issue...because then it will be transparent to everyone.
Make It Or Break It returns tomorrow, June 28th at 10 PM. It has been far too long since we've caught up with Lauren, Kaylie and DJ Tanner. The Lauren and Kaylie cat fight should be Pasha and Maya style!
Posted by OlympicEffect at 7:24 PM