Yes, the Shibs are going to be skating to Memoirs of a Geisha. That team we are supposed to love is getting in touch with their Japanese heritage while hoping we forget what geishas are all about. I don't know that Maia and Alex are the ones to act it out, but I'm anticipating a more generic program in kimonos somewhat similar to Mirai's botched effort. It will just be trained about 10,000 times more than Mirai ever managed to. 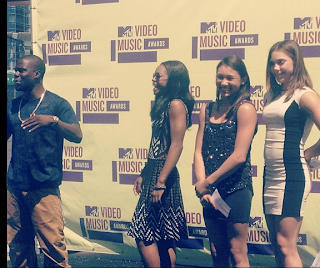 Gabby, McKayla and Kyla at a VMAs presser (Jordyn and Aly were at LIVE with Kelly.) Will we ever see them compete again?


Jordyn and Aly on LIVE with Kelly.

Katia Gordeeva and Ilia Kulik opened their own ice skating training session. Imagine her skating skills with his jumps. To. Die. For. The drama of the 'are they or aren't they together' aspect of Russian marriage should entertain the skating moms year round.

Larisa Iordache has recovered from her broken sole. Catalina Ponor and Sandra Izbasa have both decided to continue their gymnastics careers despite Ponor's initial claims of retirement.