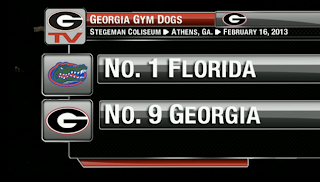 I apologize for being late, as I just had to deal with worthless employees at Best Buy. It is bad enough when one has to go in and asked some stoned, thugged-out employee whether they have the latest Smash CD. It is even worse when they have it in stock and the store is too disorganized to locate it. Listen you worthless man, I have five minutes to buy a gift to cheer someone up before covering gymnastics. Please go sit and spin.  Thank you.

I'm rather excited for this meet. Florida is out for blood this season and everything Jay Clark tried to accomplish over the last few years is suddenly coming together.

We are supposed to see Bridgey Caquatto in exhibition on bars and floor this week (that was the plan this week). Alaina Johnson is not expected to be back until senior night.

I love how Cassidy McComb still speaks as though she is os the team and is giving the bullshit line that they don't want to win more because it is Florida. Please, Georgia success has always been based on emotion. They were up and rocking for Alabama and then a hot disaster when they let their guard down against a lesser team like Kentucky. 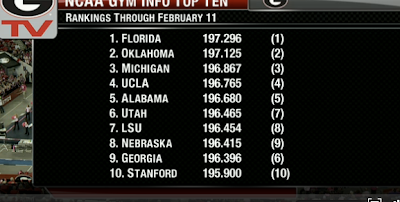 Let's be honest, you know these girls didn't have dessert the weak before Florida. They skipped the extra sugar in their coffee.

Danna Durante is looking slightly less dowdy than usual. Several of the gays in attendance likely have much more makeup on.

Noel Couch is in vault...groan. 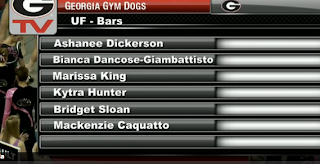 Hires- Lowish FTY with a sizable step back with her left foot.  9.825

Scores are way higher on vault than bars.

King-UB-Overarched a handstand, but held on. Another short handstand. Hop on the dismount. Gators are giving it away on a night w bs scoring   9.675

Rogers-small shift to the side. She is always slightly off center and took a tiny hop. Great 1.5TY   9.875

Hunter-UB-Nailed Hindorff, shootover, hop on full out. Giving it away. Hop and a step really.  9.825

Sloan needs to right the ship. The 9.800 is going to hurt from Ashanee. Gorgeous set and sticks the double layout. 9.950

Macko-Nailed set. Possibly a slightly short last handstand. Stuck the dismount. Very good set. Slight stall on the bail where she corrected herself.  9.925

The Gators need to turn up the heat because the Gym Dogs have the momentum and the scoring on their side. The vault judges are giving high scores, but they were out-competed on the first event. The Gym Dogs land these vaults well every week and they look to be gaining confidence.

If Bridgey is exhibitioning, we aren't seeing it. The Gators really need her to replace Ashanee or King for the post season. If Bridgey can stick her double layout and the team can get another 9.900 from Alaina, their bar lineup could be the top bar team in the country at NCAAs. They will need that advantage during the post season.

Feature on Lindsey Cheek. You can only wonder how much better Jay's tenure would have gone if she could have managed to be a healthy, steady contributor during the past two seasons.

Rotation 2.  If the Gators do not stick their vaults, they will be in a hole. If they drill them, this will be a great meet.

Tanella-UB-gbig jaegar, short bail, Stuck blind full+double tuck. Such a slow-twitch routine, but it is gorgeous. 9.875

Jay-Khorkina, small hop forward on full out with low chest. Not a gorgeous routine after seeing Tanella's extension.   9.800

Worley- great tkatchev, 1 tiny short hs, slight hip turn on the bail catch, stuck double layout. Had to hang on to the landing for dear life.  9.900

Hunter-VT-NAILED 1.5TY, far superior to Jay's in terms of dynamics and extension. Perhaps a baby hop.  9.950

Davis-UB-it is a bit of a joke that she is #1 on bars. She is absolutely consistent, but there is nothing special in the routine. Usual hit set with a stuck landing.  9.950

The Gators look to be struggling to get the momentum on the road, but they are fighting. Given the Gym Dogs' struggles on beam and floor, this meet is far from over. The Gators need to nail floor, as it can be a difficult place to complete and earn scores in Athens for the opposing teams.

The Gym Dogs continue to look strong and their chemistry is far more positive than it has been in years past. In addition to the improved health and actual gymnastics, Danna's energy seems to be meshing with this girls far better than Jay's did. Personality matters in a head coach, perhaps more than technical knowledge. 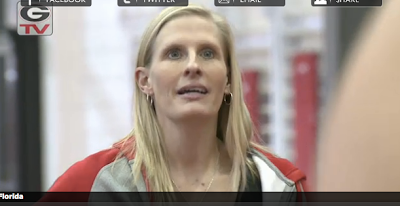 Danna looks so much more put together in practice than in meets. Her energy is working for these girls. Jay often got negative during meets and we can only imagine what he was like in the gym during arduous times. Danna does seem to have that 'calm confidence.' 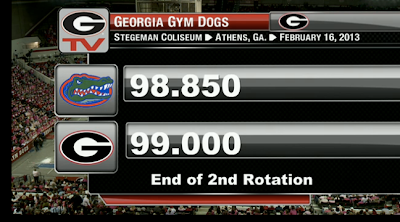 Earls will not due floor due to a tweaked ankle.

Persinger-L Turn, Aerial+Beat Jump, BHS+Loso (small wobble but saved), gainer front to 2 ft,  wobbling through the leap combos. How she is sucking now that she is in better shape?  Round off+ 1.5 twist and a hop.  9.725

Couch-BB-BHS+loso, Falls on gainer front to 2 ft (punishment for doing such an ugly skill), Noel seems to have forward head posture like myself. This meet just got interesting. Stuck bhs+bhs+double full dismount.

Sloan-FX-If she spent more time dancing than lounging on floor, she might be able to do the double pike last. Front double full (shaky, but hit), Others would've fallen, Double Pike, Back 1.5+Front Layout.  Solid. Needs to move the double pike last to get a bigger score. Perhaps should do a front pike out of the front double full for a more impressive composition.   9.850

Ashanee-FX- Double Arabian, Front through to Double Tuck.   Usual form. Landings not quite as stuck. STUCK double pike with a chest up, as only she can ever seem to do. If you ignore the feet, it is hella impressive.   9.875

Worley-BB-Beat Jump+Sheep,  BHS+Loso (fall)  Just as I was about to discuss her improvement and how Florida was lacking the sheer momentum...    The Gators have to feel the shift now. They just need to stay the course and take the win. Stuck gainer full.

King-FX- Double Layout bounce back and hands down. Ugh. She has not been herself ever since she went back elite over the summer.Front Layout+Front Full, The British coaches seemed to tweak her technique just a bit. Good double pike. Shame to see her lacking that complete confidence she had the last two years.

Earls-BB-BHS+loso, Fall on a side aerial that was unnecessary. She was just off and didn't even fight. Bizarre.  Big double tuck. Georgia imploded on beam after a week of focusing on it. Did they turn it into a headcase type issue by focusing on it?

Hunter-FX-Double Layout...small bounce back, Rhonda looks ready to kill someone, nailed second pass, Open double tuck...slight bounce back. May not go 9.900 based on some of the floor scoring.

Beam was a fail for Georgia and it is a shame to see the Gators just a bit off and lacking in energy and momentum. 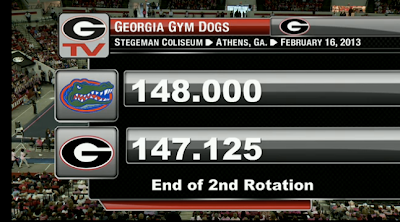 The energy got so off during the third rotation. I became worried that someone would injure themselves on floor. Oh, how I miss Alaina.

Feature on Whitney Kirby pretending she has a shot at the beam lineup. Despite their woes the last few weeks, they are not THAT desperate.

Even though we know that the Gators struggle with peaking too early, it is infuriating to see them look anything other than dominant.


This could get shaky with Hires and Persinger on floor.

It appears that King is last on beam so that she doesn't destroy the momentum if she falls. She was so strong on beam last year. This season is just a tad bizarro. This Gator team has the ability to be UCLA 2004-esque. It is bizarre not to see them go 49.500 on every event.

Stageberg-BB- Aerial+BHS, Switch+Shoushonova, Back hip circle, F Turn, BHS+Loso+Full (stuck).  Got the job done. Four to go. This is preparation for the post season right now.   9.825 (steady, not spectacular)

Sloan-BHS+Loso (moved back so she didn't wobble), F Turn, Switch leap (finessed a drop shoulder and kept the leap connection going and no wobble), side aerial, stuck double full. Fought the entire way. Rhonda has to be pleased with that mental win displayed tonight. 2 down, 3 to go.   9.875

Tanella-FX-Double Pikle (not as high as usual), 2nd pass-stays in bounds on the leap, Who calls her every week?  God? Such improvement this year.They are talking about them using mustaches.  I cannot imagine Kinsey, Cory or Marline acting twelve with that bullshit.  Rudi (hit)     9.875

Hires-FX-Eyes on the crisis, Double Pike...big step back (OOB?), Front Layout+Rudi (little sloppy but holding it together), Low double tuck (open body position) step forward, but didn't fall this time. Shayla was SCREAMING at her for a good 20 seconds in the corner before the last pass. it was a bit much.   9.725

Jay-FX-Full out (stuck, chest way down), such a squatty girl, FHS+Front Double Full+Punch Front, Is Cassidy a volunteer assistant coach? She uses 'we' an awful lot when discussing the team--girl you graduated a while ago, Double tuck big steps back with chest down (flew back a bit),

Beam and Floor continue to unravel the Gym Dogs.

Ashanee-BB-1 arm bhs+loso, corrected herself and stuck it, Switch leap+Pike Jump+Twiddle jump, F Turn, Round off+Double Tuck, one baby step back. 5 down for Florida for the win.   9.850

King-BB- Can she hit and be the 6th beamer? Will it be Spicer? Will Alaina be the sixth beamer?  Front aerial to 2 ft (wobble), BHS+layout to 2 ft (big wobble), WTF, she was a 9.950 machine last year, Stuck double full.  Just not the same gymnast this year on beam and floor.

Couch-FX-Stuck piked full in (low chest as always), whip through to double full (stuck), I cannot pretend this routine is acceptable for a college senior. I cannot. STUCK double pike.  It is impossible to hate her. She works too hard and is too strong mentally, but yeeesh.  9.900


There was so much hype for this meet and it started with so much energy, but it is difficult to leave it feeling anything other than a tad bummed out.

A 197.300 for Florida is fine, but they are capable of so much more. This certainly shows that Oklahoma is really in the mix for the post season, as they can easily best a 197.300.

196.175 for UGA- seriously weak for this point in the season. The Gym Dogs may lose a big meet at home, but they rarely ever blow it like this after such a strong start. Noel falling off beam?!

What a day.
Posted by OlympicEffect at 1:05 PM