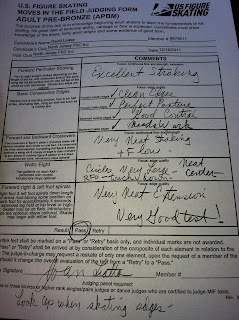 Monday, I took (and passed) my Pre Bronze Moves In The Field Test.  For me, it was a small but important step.  Learning to skate has been a fun process, but it has also added a great deal of confidence, passion and joy to my life.  Taking a risk and learning to skate when I feel like a tall giraffe has done wonders for my own comfortability in my skin and provided me with a sense of achievement.

On the day of the actual test, I felt confident but concerned.  I've been back on the ice since October (began lessons end of July/beginning of August) and have been preparing for the test for at least a month.  The back-outside and back-inside consecutive edges have given me fits since I've learned them, but I actually felt relatively confident before the test.  Ironically, I felt much more confidence with the bronze moves.  I believe not having the stress of preparing them for a test may have contributed to the ease I felt working on them daily.  I stopped stretching and conditioning like a beast about a week before after pulling my hip flexor.  I didn't want any issues from over-stretching when it came time to do a spiral in public for the first time.

Normally, I practice on an ice surface with a sand bottom.  There is a slight difference in texture between that and a hockey ice surface.  It typically only takes about a minute or two to adjust to the slightly different timing and feeling.  Between the difference in surfaces and my own adrenaline, I wound up making much larger curves than I ever do otherwise.  My lobes felt like they had the power of Tonya Harding.  This would come into play during my actual test.

I got to the ice vault before any of the judges or officials were there, which had me doing the requisite checking of my email to make sure I went to the right place.  My parents and one of my good friends actually came to the test, which was very nice since they've never actually seen me skate.  Prior to the test, I paid to practice for a half hour and the nerves were actually worse warming up than they were during my actual test.  There was a distinct feeling of, "this may not be a good day," when I went to stroke around the rink.

One my actual test, I shared the ice with twin Asian boys taking their pre-preliminary test.  As if I didn't feel self conscious enough taking my beginner test, I was now at risk of being shown up by second graders.  Natasha has made sure that I practiced my moves in order and adjusted my breathing between crossovers and edges so I didn't randomly overcook them.  It was all for naught, as I wound up changing the order of everything to the order of the corresponding pre-juvenile test with my crossovers tacked on the edge.

The twins followed me around the rink and were utterly adorable.  Adoption may be in the works.  Natasha later told me that "You look like a the mother goose.  They follow you."


The only things that gave me any actual pause on my test were the back edges (as expected) and my waltz 8.  On my back edges, I felt off on my back outside edges and made sure to hang on for dear life.  On my back inside edges (the more difficult of the edges), I typically botch the first curve and do the rest well.  For whatever reason, I did the first correctly and wound up overcooking the third and almost losing it.  My club secretary later joked with me over my written evaluation.  With the stress of the actual test behind me, I'm able to do these and look up, feel comfortable and not look so constipated.  It is amazing what a little pressure will do.


With the added adrenaline, my waltz 8 circles wound up being gigantic.  This was amusing, as I wound up crossing baths with one of the twins during the actual test.  (Of course, one of the poor twins was widely thought to be better than the other.  For every Paul, there is a Morgan...)  Between my huge curve and his curve to nowhere, we crossed and I lost my focus right during my last curve.  I practiced these 20 times in a row to make sure I wouldn't lose my focus, but I wound up making a stupid error and lifted my leg anyway.  Overall, I'll say that I skated at about 65 or 70%.

I've had two lessons since and am aiming to pass my bronze moves and pre-bronze free within the next few months. I've been jumping in earnest.

Natasha: This is why salchow easier than toe loop.
Me: Really? I find toe loop easier.
Natasha: No.
Posted by OlympicEffect at 8:54 AM