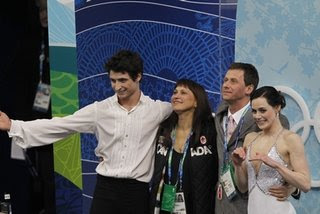 The big question may be just who Igor was working with.

MOSCOW, June 4 - Reuters, Artem Kuznetsov. crack in a business relationship coach of Olympic champions in figure skating ice dancing Canadians Tessa Virchu / Scott Moir is the result of the desire to start an independent Igor Shpilband coaching, said the agency "F-Sport" his long-term business partner, Marina Zueva.
Shpilband was dismissed from his post at the club Arctic Figure Skating Club in Canton, Michigan (USA). The decision to dismiss him was made public at a meeting with coach Craig O'Neill, general manager of the arena Arctic Edge, where Shpilband worked in tandem with Zueva and rink owner John Stansikom.
Zuev reported that all business relations with Shpilband not yet broken, it does not preclude the resumption of joint cooperation. "Nothing is impossible," - said by phone Zuev.
"Who started the conflict of interest. Without my consent, Igor decided to have his personal disciples, whom he coached away from me. I occupy in this matter is quite clear position: it is a conflict of interest" - explained Zuev.
She said that in this case does not present students involved coaches, including the Americans Maya and Alex Shibutani and bronze medalists of the World Cup in 2011.
"The speeches of our joint business is not. He just wanted to open his own business within our overall business. This is a conflict of interest. This professionally wrong idea to open your own business," - she said.
Zuev sees no problems in that there was a break in relations and a half years before the Olympic Games in Sochi. "It's better than two months," - she said, then looked in a different way on this issue.
"Only half a year to wait for the cause, I think you can. Well, okay," - said Zuev, evaluating the solution Shpilband.
Now the agency interlocutor difficult to talk about how when the final break-up she will share with current students Shpilband. "Everything will be completely dependent on them (figure skaters) solutions, - she said. - How to be solved, and solved."
As previously reported issue Detroit Free Press, the main reason for exclusion from work Shpilband is insufficient attention being paid coach of the three pairs of the strongest club - Virchu / Moira, former world champions Meryl Davis / Charlie White, and Shibutani. According to the newspaper, skaters issued an ultimatum, saying that either they leave the club in Canton, or it has to do Shpilband.
Posted by OlympicEffect at 2:04 PM