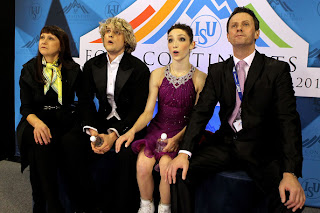 Today, June 4, Canadian Press reported the collapse of brilliant coaching duo of Igor Shpilband - Maria Zuev, who worked at the club Arctic Figure Skating Club (Canton, USA) with the leaders of the world dancing on ice - Olympic champions Tessa Virchu and Scott Moir (Canada) Meryl Davis, world champions and Charlie White (USA), World Championship medalists Maia and Alex Shibutani (USA). Igor Shpilband was dismissed allegedly due to the failure of the three pairs of these to continue to work with him. Director General of the Federation of figure skating in Russia (FFKKR) Valentin Piseev said portal TEAM RUSSIA-2014, that Russia is ready to create all the conditions of Igor Shpilband to work with local dancers.


- Frankly, it is very difficult now to comment - said Valentin Piseev. - I can not believe that all that happened - the truth. Marina Zueva and Igor Shpilband many years worked so amicably and harmoniously, that just do not want to believe it at all. Perhaps there has developed some controversial situation and simply took up emotions?


- The Detroit Free Press article they say about the alleged internal contradictions.
- I admit that they could be - this is normal for any of the creative process. But not so strong as to lead to such consequences. Moreover, on the eve of the Olympic Games, when the disciples Zueva and Shpilband occupy almost the entire pedestal. Marina and Igor's not just champions were prepared, and established the direction in ice dancing - that is, to work creatively. At the last World Junior Championships I spoke to Marina, she had so many thoughts about the development of sober dances on the ice, so creative ideas! .. Well, the work of Igor, I think it makes no sense at all resemble something about it are the results of the best American and Canadian dancers.Again, it is very hard to believe, when the fall such creative unions, it is difficult to remain indifferent to me, after all, does not leave hope that everything eventually formed.


- And if the information is confirmed, the Federation of figure skating in Russia will be ready to offer Shpilband to work with Russian couples?
- We are pleased to accept and give him everything working conditions. While we are not associated with Igor. I understand that now he should meet with their students Meryl Davis - Charlie White. Maybe after this will be a new, more complete information, what happened there. After that, today, tomorrow, perhaps we ourselves take the initiative and contact them.


- After the end of the season to Zueva and Shpilband, along with his coach Alexei Gorshkov for the formulation of programs and consultations went Ryazanov Russian duo Ekaterina - Ilya Tkachenko. Could this be a cause for jealousy to Shpilband by Canadian and American students?
- I do not think. We had an agreement with the Marina and Igor, which Ryazanov - Tkachenko, they will not only advise but also help them in their work. And before they were always open to cooperation - remember, we sent them to Jan Khokhlov. And if it comes to that, the duo of Yana Khokhlova and Fedor Andreev, the son of Marina Zueva, could be in this sense a great threat.
Posted by OlympicEffect at 10:23 AM