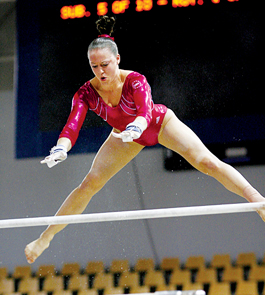 Chellsie Memmel told International Gymnast that she is giving the Olympics on more try.  Memmel just had a second surgery on her shoulder since the National Championships.  It will be difficult for her to recover, get into shape and upgrade her bar routine in time for Olympic Trials, but we know that Memmel will rip her body apart and still do a hindorff+pak salto when the cameras are rolling this summer.  It is unlikely that we will see the 2008 Olympians compete before the American and Cover Girl Classics this summer, but we know the five returning veterans will prove to make this summer drama-filled and full of speculation.  Memmel plans to attend college after her final Olympic bid.
Posted by OlympicEffect at 1:21 PM