Catalina Ponor is back to being disgusting on floor again.  The camera angle was not forgiving this time.  Her piked full on is sporting a nice knee bend and her triple full is just like before.  My biggest issue lies with the inexcusable beam shoes, which really kill her leg line during her vamping. They are not remotely sexy. Whenever I see beam shoes, have visions of Moceanu in Atlanta.  P.S.  Safri Duo is so over. 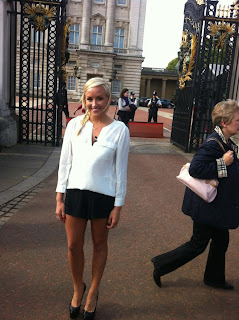 Camp Tidbits:  Alicia's front double full was only done in the pit.  There is a fat chance she'll compete it.  Shawn Johnson won beam after adding back her back full, but she did not do any training on floor.  Shawn has had some unsettling tweets the last two days.  Yesterday, Shawn tweeted ''You just have to believe, 'everything happens for a reason'' and today she informed us, 'new day, new goal.'  She also went biblical with 'Corinthians 10:13  God is faithful and will not let u be tested beyond ur strength.' Best wishes to Shawn. She certainly knows how to be vague and arise suspicion and attract attention.  Just remember, we'll always have that butter statue!

ETA: Shawn sprained her foot.  Though, she didn't manage to somehow do it in ice skates.  Get well soon and work on that bar routine!

ETA: Shawn is now shocked that the news about her sprained foot is out USA Today quoted her father and she pretty much Tweeted she was injured...  Get ready for Sheryl Shade to exploit the injury when Shawn isn't named to the World Team.  We may hear about this foot for a long 10 months!

David Boudia continues to give his agent a heart attack via Twitter.  A month or two ago, Boudia tweeted about peeing in bottles while driving.  Today, he tweeted that he has never smelled this bad and apologizes for the people behind him in line.

More videos from ROM-GER-SWI after the jump!

Posted by OlympicEffect at 9:42 AM