Foray Into Adult Skating: The Man With The Red Gloves 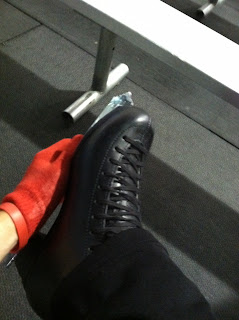 Months back, I began working out with the intention of competing in adult skating.  First, I had to get good.  I was inspired by Black Swan and an unflattering photograph of myself following a breakup right before the holiday season. The Black Swan Diet and workout regimen began in earnest by February and I finally got around to getting back on the ice.  I've always loved skating, but I've found it difficult to make time to go.  Or that is what I told myself.

The greatest hindrance to my career as a fabulous adult skater has been my boots.  Like Jeremy Abbott, I've had equipment issues.  My greatest issue has been that I wasn't quite sure whether or not I was even having equipment issues or if I was merely a wimp who couldn't take the pain and didn't know how to tie his skates properly.  For the last two years, I've skated on and off.  The one constant thing about any session I've been on is that I'd have to re-tie my boots at least twice due to intense pain caused at my fifth metatarsal.  When buying skates, I was quite intimidated by the pro and was sure he'd say it was just me...considering they were molded to my feet.  It turns out that my boot just needed a little punching and I've now become a real skater.  I've even made an appointment for boot sharpening.

Getting into sick shape prior to skating has been extremely helpful, as there is nothing worse than falling and seeing all of your problem areas in the plexiglass as you lumber around the rink.  Now that I'm able to enjoy my time on the ice, I've embraced the strange peculiarities of the skating world that really need to bleed into mainstream society.  There is nothing quite like warming up on the ice at the crack of dawn and wondering whether you're imaging things or if some gem is actually skating to a muzak instrumental version of Bryan Adams' Everything I Do.  Of course, East of Eden and Glory are also in the music rotation and when no one is looking, I may just have Michelle Kwan moments coupled with a little Todd Eldredge intensity.  Oh, how I long to pop open an axel and kick the boards in Todd's honor.

When I got back on the ice, Miss Massachusetts offered me the sage advice of watching out for my toe picks.  I laughed and quickly brushed it off, yet found myself belly down on the ice after catching a toe pick on a front crossover last Sunday.  Natasha, the Russian coach at the rink, earned by eternal respect by laughing and skating by me.  I soon asked her for lessons, as I need a demanding Russian in my life.

Given that I have dreams of being a full-fledged ice queen, I've been upping the amount of time I spend at the rink. I've been hitting all of the usual spots and even passed Fumie Suguri in the Ice House lobby.  Who is coaching her? Does it even matter?

Earlier today, I was recruited for a skating club by a few retired teachers.  I'm never quite sure what to make of it when I'm flagged down on the ice.  There is always the fear that I've cut someone off or wrote something unflattering and am about to be called out.  Of course, if the woman is an Asian skating mother, I've come to learn it automatically means that we're kindred spirits and huge fans of one another.

I wasn't sure I was ready for spirals, yet the retirees showed me up at the rink enough that I gave it a whirl.  I now have a soreness below my butt cheek that only comes from attempting to be Sasha Cohen.  No amount of yoga can prepare you for that level of intensity.  I feel failed by Rodney Yee and Jillian Michaels (terrifying lesbian turned yoga impresario.)

To make sure I don't slide on my Black Swan Diet like Julianne Hough, I've taken to imagining the voice of Tara Lipinski calling me slow as I do laps around the rink during sessions.  It works like a charm.  Imagining the face of Beijing Nastia Liukin has also proven quite helpful whenever I feel like cheating on my diet or going easy on my conditioning.

Tomorrow begins my first lesson with a bonafide Russian.  Natasha is one of those Russian women who is somewhere between thirty five and seventy five.  One can never be quite sure.  She still has her jumps, her skills and her demanding Russian yell in tact.

In other news, I never knew that my leg even had a funny bone until I unexpectedly fell directly on my knee cap.  Oh, the things we could live without learning firsthand.

Posted by OlympicEffect at 5:13 PM