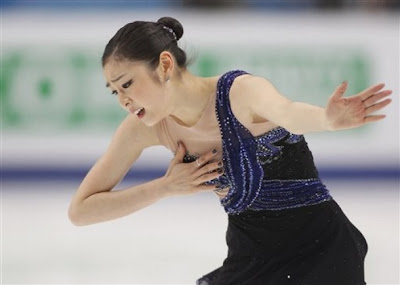 I just got down watching the ladies short and decided to unfollow a few people on Twitter.  It is about time.  Strangely, I didn't unfollow the Polly Positive morons, as they make laugh.  Today was the big day.  Yu-Na skated competitively for the first time in 13 months.  Alissa Czisny got a rematch at Worlds.  And Mao Asada had a rematch with the Technical Caller Shin Amano.

It was a day that sort of lived up to the hype in the extent that these results will be debated for some time, but it was a sloppy event all around.  When such things happen, the caller seems far more important than ever to make sense of the mess.  Things got murky.

Many will see a mistake from Yu-Na Kim and automatically claim Olympic Champion bonus.  Yu-Na did not skate her best, nor did she perform as well as she usually does.  The stumble out of the Triple Lutz was somewhat shocking after reports and videos have showed her being rock solid on it all week.  What did emerge was a fighter.  Yu-Na did what Brian Joubert could not be tacking a double toe onto a solid Triple Flip.  Her Double Axel was among the the strongest she's done.  Everything else was in order throughout the rest of the program.  Now, I am not delusional enough to think that Yu-Na deserves higher GOE on her layback than Alissa Czisny.  The people who argue that are the same ones who will try to claim that it doesn't matter if a spiral is fugly as long as it has a decent edge.  Um no.  Yu-Na is in first place.  You could make an argument that she should be second, but the overall strength on her skating has kept her near the top.  Yu-Na's saving grace is that she has textbook rotated jumps.  In the new age of instant replays, one must take off and land in exactly the same position.  It is all very Hitler Youth.   Yu-Na did okay, but it wasn't the same as usual.  I question the decision not to compete at Four Continents (as I have all season long.)  Yu-Na's PCS were actually kept in a respectable range.  Going by the protocol, the layback is really the only inflated element.  That GOE is inflated in terms of position, but the execution of the requirements is sound.  It just isn't sound to our eyes.  Yu-Na has never really been in many positions where she makes mistakes in the short but has to come out and nail the long.  Hopefully her jitters are now out.  (65.91)

Miki Ando had the cleanest skate of the day, yet is in second.  She didn't attempt a Triple Flip, but did hurt her potential technical element score.  Her lack of a Triple-Triple is also why Yu-Na is able to be competitive with her.  I understand those who want the clean skate to be first, but even with a few smiles from Miki, the overall stiffness of her body continues to lack any emotional connection to the music.  Sweet girl.  Smart girl?  Eh, she dated Morozov.  (65.58)   The virtual tie with Yu-Na has me concerned.

"I don't want to live in a world where Miki Ando is two-time World Champion."- Tarasova's Mink


Ksenia Makarova is somehow third after executing a short program with a Triple Toe+Triple Toe, Triple Loop and Double Axel.  The content feels very Amber Corwin, but she did manage to get every jump around cleanly.  I don't see how Ksenia is ahead of Alissa when judging the overall quality.  Mind you, I like Ksenia's skating.  She is fun to watch and is a Russian singles skater who actually cares about aesthetics.  This is a failing of the IJS, as the overall maturity, cleanliness and heart of the program isn't accounted for like it once was.  (61.62)

Alissa Czisny made it through a short program at Worlds with only a hand down on her Triple Flip.  Unfortunately, she got an edge call. That is the reason why Alissa is behind Makarova.  Yet, the overall short program is far superior.  I don't see the rationale for not rewarding Alissa with the best spins of the day.  The USFSA needs to learn how to politick and psychologically fuck with the other judges and competitors.  It wasn't a perfect skate, but the hurdle is met.  Alissa must be feeling more confident.  It is interesting that Alissa really connects with Jason, while Jeremy connects with Yuka.  It is similar to Paul Wylie being Mary's baby, while Evy loved Nancy.  Fourth for Czisny is good.  If she skates cleanly in the long, she will medal.  There is no way that Makarova has the technical content in the long to beat her.  It doesn't exist.  And let's be honest, Alissa's short is nice but the long has the potential to be magical.  Mission Accomplished.  (61.47)

Irina Slutskaya loved Alena Leonova.  She would.  If ever there was a skater who bring up the same level of bile as Irina, it's Alena Leonova.  The dress alone tells you what kind of Russian crap you're about to witness.  Still, the muscular-thighed skater willed around a Triple Toe+Triple Toe, Triple Flip and Double Axel.  Miraculously, she made the final group.  Her jumps may have been solid enough, but the overall level of tacky skating is inexcusable.  One should never have pom-poms dangling off of their costume.  Irina and Alena can go live in hell together.  Just stay away from me.  Find another corner.  (59.75)

Somehow, Carolina Kostner fell on her Triple Flip and took the final spot for the last group in the free skate.  Remember how Carolina was skating cleanly when she stuck to Toe Loops, Salchows and Loops?  She whips out the Flip and falls.  Enough said.  Carolina is a Fumie Suguri case where you begin to realize that their skating and placement is never going to get any better about 10 years before that though even begins to cross their mind. I'm beginning to wonder if Carolina slept with Ottavio.  You know how these skaters can be. (58.66)

Mao Asada has spent a year searching for jump technique.  I must say, I don't see the improvement.  It appears that the search has only made her more nervous and dubious about her own ability.  I'd consider sending her to Yamada if it caused her to skate with lightness and joy again.  Back when Mao first came on the scene, she only did Flips, Flutzes, Loops and Axels.  Her Toe-Axel and Salchow were not a part of the equation.  Until the Hitler Youth regime of Shin Amano, Mao doesn't put in her Toe Loop because it doesn't tend to be as consistent.  Unfortunately, Mao's Flip has become a real issue over the last two seasons.  If there is a jump that tends to be questionable, it is her Flip.

I feel that The Bells of Moscow has ruined Mao for me.  No matter what she does, everything is boring compared to that mess of a program that I am still just beginning to comprehend.  Where does one go after Mao slaps herself across the face with both hands?  It is wrong that Mao is not in the final group, but that is the IJS for you.  Mao's overall skating is vastly superior to everyone aside from Yu-Na and Czisny.  The jumps may be another story, but this is about skating.  Mao's costume was quite a 'lot of look' at first, but a relief after some of the other things she's worn over the years.  I blame the cross eye that was never fixed.  She didn't wear an eye patch for years like my sister.  (58.66)

Rachael Flatt lumbered out dressed like Big Bird and only did a Triple Flip+Double Toe after Ms. Cocky mentioned the Triple-Triple in almost every interview she's given this season.  It didn't even look like she attempted to go for it.  Who is she kidding?  Not Shin Amano.  Miss Reliable also doubled her Lutz.  I didn't know whether to be happy or to fear for the US ever regaining three spots.  Somehow, Lori Nichol pulled a Mariana Bitang-Gina Gogean bout of bullshit and got Rachael a Level 4 for her step sequence.  Yes, because when I think of footwork, I think of Flatt.  Rachael and Patrick are a marriage of debutante balls and footwork.  They can go hang out in that corner with Leonova and Slutskaya.  Note how much money has obviously been spent on that hideous dress and ghastly haircut.  In honor of the Royal Wedding, I think Rachael should stick with hats.  I bet there's a nice Blossom-type hat that could hide her a bit.  (57.22)

Expect a podium of Kim, Ando and Czisny in some order.  Poor Mao :(
Posted by OlympicEffect at 7:57 AM