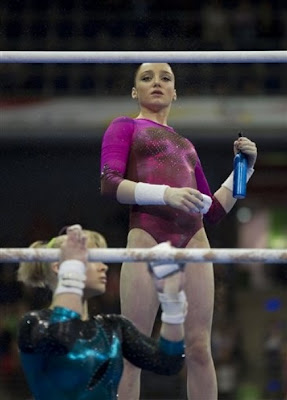 Blythe at the Gymnastics Examiner keeps improving with her Quick Hits.  She continues to add more personality and brutal honesty with each report.  That is why we like her so much more than Anne at Gymnastike.

In case you don't feel like reading the reports, I'll give you a rundown:

Ana Porgras is sick and had a rough meet.  She has been looking spectacular in training lately, but Bitang and Belu won't excuse anything.  She jumped off the beam on her series.  She then scratched floor. This may cause me to wear black for the rest of the day.  I don't love Euros that much as a competition (Team and EF one year, AA and EF the next...WTF), so I may settle on black socks and black underwear.

Amelia Racea sat down her dismount on bars.  She hit beam and then had a disastrous floor routine, which should improve Pitic's standing in the eyes of the evil head coaches.

Aliya Mustafina killed it on all events.

Anna Dementyeva did well despite a weak vault.  She had little errors on beam and floor, but should improve as the week goes along.

Komova's replacement was a gross mess and should be sent to Siberia following this meet.  I won't bother typing out her name, since it remains to be seen whether it will even be worth it to master the spelling.

Nabieva didn't do floor.  She should make finals on vault and bars.

Beth Tweddle has a strained achilles, yet is still doing floor.  She scored 15.50 on bars with her 7.1 routine.

Sandra Izabsa rocked her three events and should easily make finals on floor.

Diana Chelaru hit but continued to look like one of the Romanian Juniors at the 2000 ITC/2001 ATC.  In the words of Ne Ne Leakes discussing Star Jones, that DTY is 'special.'

Preziosa looked good.
Posted by OlympicEffect at 11:02 AM